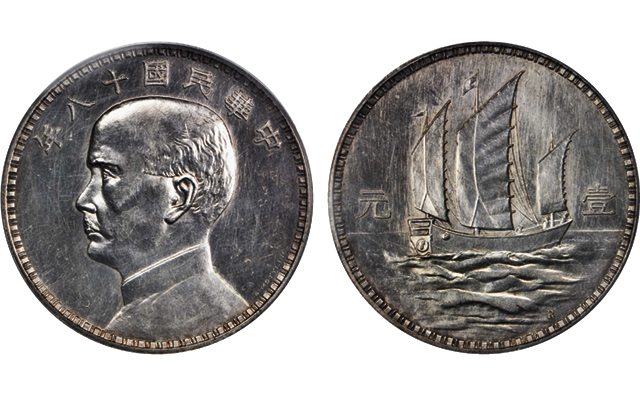 An Italian-made 1929 pattern that inspired China’s famous 1932 Birds over Junk silver dollar lacks the birds that gave the design its name, and later the sailing vessel was modified to reflect the two-masted version in use in Asia.

Though it was struck for circulation for only one year, no 20th century Chinese coin may be more iconic than the “Birds over Junk” silver dollar (yuan). The design’s origin, however, can be found in a rejected pattern for a Chinese coin struck three years earlier. An example of both the 1929 pattern and 1932 silver dollar appear in the auction.

In 1929, the Chinese Ministry of Finance ordered a new silver dollar honoring Sun Yat-Sen on the obverse. Five mints were commissioned to create designs. Attilo Motti, chief engraver at the Italian Mint, submitted two slightly different versions of the pattern, which features a Chinese sailing vessel, or “junk,” on the reverse.

Motti’s pattern was modified for the 1932 silver dollar, with some fairly significant changes. The junk on the 1932 coin features two sails, in accordance with custom in China, rather than the three masts of the 1929 pattern. Three birds were placed aloft in the sky above the junk, giving the coin its name.

Yet another version, without the birds, was issued for circulation in 1933 and 1934.