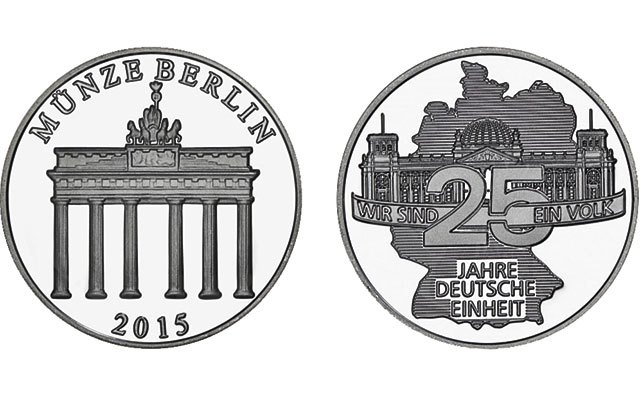 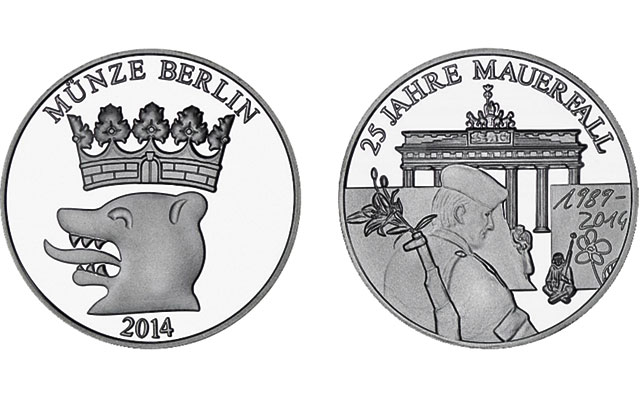 The 2014 medal, honoring the 25th anniversary of the Fall of the Berlin Wall, remains available as well.

The Staatliche Münze Berlin (the Berlin State Mint) on Jan. 29 released its annual silver medal, which in 2015 marks the 25th anniversary of German reunification.

The .333 fine silver medal was launched at the World Money Fair in Berlin, where it was available for purchase for €13.

The obverse of the 2015 medal shows the Brandenburg Gate in Berlin, with the mint name in German and the year date. Stefanie Lindner, of the Berlin Mint staff, designed this side.

The reverse recalls the Oct. 3, 1990, signing of the Unification Treaty. The date is now a holiday in Germany. The famous rallying cry, WIR SIND EIN VOLK ("We are one people"), appears with the Reichstag (seat of Germany’s parliament) and a map of the reunified nation, the legend 25 JAHRE DEUTSCHE EINHEIT translating to “25 years of German unity.”

The motif was based on Michael Otto’s design for a similar medal in 2010.

The medal measures 32.5 millimeters in diameter and comes presented in a card.

There is no mintage limit; in fact, the 2014 medal for the fall of the Berlin Wall was so popular that the medal was struck again and remains available.

The 2014 medal also features a design by Lindner, with people passing through a narrow opening in the wall. The Brandenburg Gate appears in the background. A soldier carries a rifle with an olive branch sticking out of the barrel.

The obverse shows a bear (a symbol of Berlin), with the year date, Mint name and a crown.

To order either medal, visit the Berlin Mint’s webshop.