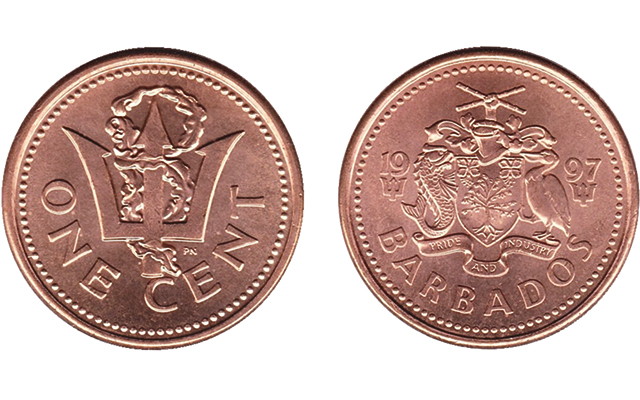 The 1-cent coin in Barbados is no longer being issued for circulation, but remains legal tender.

The 1-cent coin is no longer being issued in Barbados.

As of May 7, the Central Bank of Barbados has not issued any 1-cent coins into circulation, the bank announced May 12. At the time of the announcement, the coin was costing five times its face value in production costs, according to the bank.

The coin, which has face value equivalent to half of a U.S. cent, remains legal tender and may be used in commerce. By law, total cash payments at businesses across the country are being rounded to the nearest 5-cent increment. Non-cash payments are not affected.

Not issuing the 1-cent coin is expected to save Barbados nearly $1 million Barbados dollars (about $500,000 U.S.) annually, the bank announced.

Both cost and attrition were cited as the drivers of the decision to end additional mintages of the coin. Since 2007, the coins have been struck in the Royal Canadian Mint's patented multi-ply plated steel alloy, in this instance plated by copper, but costs escalated over the last 10 years despite the switch from a copper-plated zinc alloy. (The cent was struck in bronze from 1973 through 1991.)

The bank issued an average of about 26 million 1-cent coins each year between 2008 to 2012 (the most recent year for which data is available) and slightly more than one coin out of six during that period were recirculated, meaning at least 80 percent of the coins issued were being lost, hoarded or misplaced.

A recirculation drive in the second half of 2012, to benefit charity, recovered 10.9 million coins, but that was not nearly enough to sustain current and future demand for the denomination if it had continued to be issued.

Banks will continue to accept deposits of 1-cent coins from their customers.

There should be no increase in prices due to the phasing out of the 1-cent coin, according to the bank, based on experiences in Australia, Canada and New Zealand.

Bank officials have said there are no plans “at present” to withdraw the 5-cent coin, though it has cost more to produce than its face value since at least 2012.

The 1-cent coin shows the denomination and a trident on the obverse, and the nations’ coat-of-arms on the reverse, according to the central bank.

Through mid-2012, an estimated 536 million 1-cent coins had been issued since the denomination debuted in 1973.