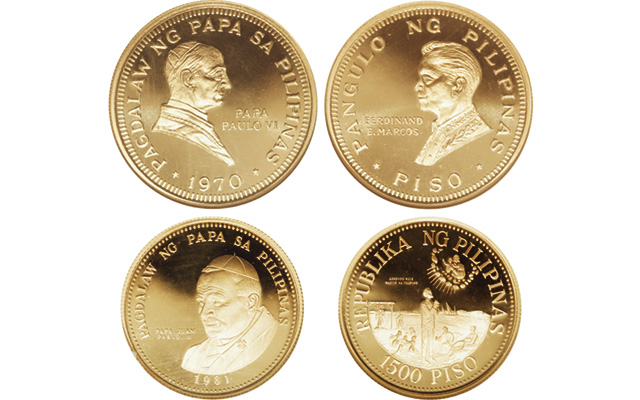 When Pope Francis visits the Philippines from Jan. 15 to 19, it will be the fourth Papal visit since 1970. Each time, the Bangko Sentral Ng Pilipinas has issued coins, including these two gold coins from the 1970 and 1981 papal visits.

When Pope Francis visits the Philippines from Jan. 15 to 19, his trip will continue a tradition of Papal visits to the island nation that dates to 1970.

Pope Francis will be the third pontiff to visit the Philippines after Pope Paul VI in 1970 and Pope John Paul II in 1981 and 1995. In honor of the papal visit, each time, the Bangko Sentral Ng Pilipinas (Central Bank of the Philippines) issues commemorative coins.

The bank confirmed that it would issue 50-piso and 500-piso commemorative coins in time for the visit from Pope Francis, though the specifications have not been announced.

According to a call for tender the bank published in September, seeking packaging bids for the sets, there will be 10,000 sets of coins, suggesting one base metal and one precious metal issue.

The 2015 coins will become the eighth and ninth coins issued by the Philippines for Papal visits.

The bank issued copper-nickel, silver and gold 1-piso coins for the 1970 visit of Pope Paul VI.

The bank generally makes the coins available for purchase, but only at sales counters inside the country.