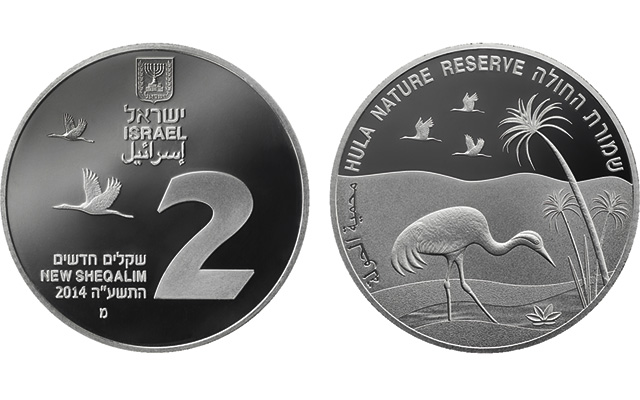 The Bank of Israel has issued 2014 coins for the Hula Nature Reserve, the third coin in a “Views of Israel” series. 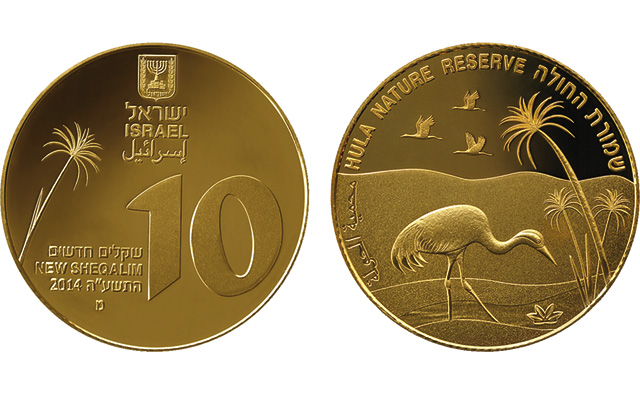 A Proof gold 10-new-Israeli-sheqel coin for Hula Nature Reserve has a mintage limited to 555 pieces.

Israel may be noted for its arid, desert landscape, but the newest coin in an annual program showcasing the nation’s countryside reveals a different side.

North of the Sea of Galilee, in the Hula Valley, part of the Syrian African Rift Valley that runs through Israel from north to south, is one of the most beautiful nature reserves of the world, according to the Bank of Israel, a paradise for birds and home to a unique flora and fauna. Twice a year, 500 million birds pass here on their migrating route from Europe to Africa.

The 2014 coins depicts the scenic Hula landscape and presents the king bird of the Hula, the crane, in a design by Tovit Uriel.

Two cranes in flight appear on the obverse of each of three coins in the program. In addition, the obverse carries the face value, Israel State emblem, “Israel” in Hebrew, English and Arabic, the year date and Mint mark.

The reverse presents a view of the Hula Nature Reserve, with palm trees and a water lily representing the reserve's aquatic plants. In the center is a wading crane, while three more fly overhead.

The Prooflike .925 fine silver 1-New-Israeli-sheqel coin weighs 14.4 grams, measures 30 millimeters in diameter and has a mintage limit of 1,800 pieces.

The coins went on sale beginning Jan. 6. Pre-issue pricing is in effect through Jan. 31.

The regular issue prices are not yet announced.

To order the coins, visit the Israel Mint website.