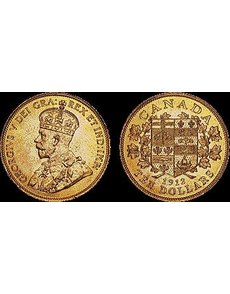 The 1912 Canadian gold $10 coin was the first to sell out of the three dates in the Bank of Canada hoard. 1913 and 1914 $10 coins are still available from the RCM in “Hand-Selected” and “Premium Hand-Selected” quality categories.

While our market analysis typically focuses on U.S. coins, it’s been hard to avoid noticing advertisements from the Royal Canadian Mint offering 1912, 1913 and 1914 $5 and $10 coins from the Bank of Canada hoard.

The RCM announced on Nov. 28, 2012, that it would offer the coins for sale directly to collectors. These pieces represent Canada’s first gold coins carrying a Canadian symbol. Their production was cut short in 1914, just two years after the coins were introduced.

Canada’s sale is reminiscent of the General Services Administration’s 1970s offerings of primarily Morgan silver dollars from Treasury Department vaults. These dollars have since enjoyed a robust market with collectors.

These coins have enjoyed a solid resale market, with major marketers continuing to sell examples at premiums over the RCM’s offering price. Collectors report that “Hand-Selected” pieces are grading Mint State 62+ to MS-63+ while the “Premium” pieces are grading MS-63+ to MS-64, with the very occasional MS-65 piece.

Mint State 64 examples are selling at auction at the $1,550 U.S. level and through dealers at the $1,750 level. It seems that the additional quantity of coins in the marketplace has not overwhelmed the market. The future looks bright for these historic coins. ¦