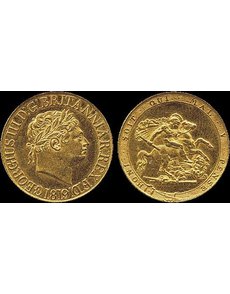 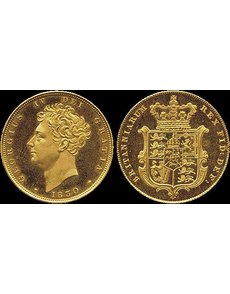 The third and final part of the Bentley Collection of gold sovereign coins is slated for auction May 8 in London.

A.H. Baldwin & Son calls the collection “the most spectacular and comprehensive assemblage of British gold Sovereigns.”

The final auction will offer 307 lots of coins from the Royal Mint in London. Highlighting the auction is the 1819 gold sovereign of George III, the key date of the London sovereigns issued for circulation, with maybe eight known examples in private hands, according to Steve Hill of Baldwin’s.

The sovereign, which traces its history to 1489 as a denomination, in modern times was introduced in 1817 following the Coinage Act of 1816. It did not replace bank notes as the popular medium of payment until certain restrictions were removed by the Bank of England from 1820 to 1823, according to the auction firm.

The rarity of the 1819 coin was recognized as early as 1829, when the Bank of England coordinated a survey with the Royal Mint to test the metal in coins then in circulation and found just two circulated 1819 examples in its holdings, according to Baldwin’s. All of the gold sovereigns struck that year were reportedly made from gold brought to the Royal Mint for conversion from bullion or mined gold into coins.

Six examples of the 1819 coin have been sold publicly, most since Oct. 5, 1998, when the piece now in the Bentley Collection was sold by Sotheby’s for £55,000 including buyer’s fee.

A seventh example was seen (by the Royal Mint, and not at auction) in 1974 but has not been seen since, and an example reportedly struck in Proof was part of the famed John G. Murdoch Collection, which was sold in 1903. The so-called Proof example last surfaced in a 1939 auction; its Proof status cannot be confirmed from the only image known, a 1905 photograph.

No private institutions — including the Royal Mint — appear to have an example, according to Baldwin’s.

Another highlight offers even greater rarity, at an estimated price far less than the 1819 sovereign.

The Proof 1830 gold sovereign of George IV was discovered, confirmed by the Royal Mint and sold for the first time publicly in 2005 in a Dix Noonan Webb auction in London, where Baldwin’s parent company, Noble Investments, bought it on behalf of the owner of the Bentley Collection.

The coin features a design engraved by William Wyon after Francis Chantrey’s model, with the head of the king facing left on the obverse. Features distinct to the coin, thus setting it apart from other Proof 1830 examples, are a milled edge (rather than plain) and, on the reverse, eight hearts in the Hanoverian arms (rather seven hearts). When it was sold in 2005, the consignor reportedly had owned it since the 1960s.

The May 8 offering of part three of the Bentley Collection occurs during three days of auctions in London, from May 7 to 9.

The sale catalog is posted at www.baldwin.co.uk.

A limited edition catalog combining all three auctions, together with prices realized and corrections, will be offered after the third sale.