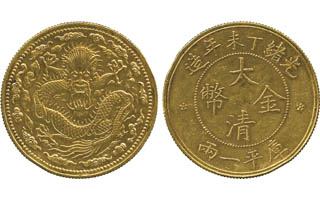 The 1907 Kuang Hsu Ku’ping gold 1-tael pattern was created as a prototype coin in the 33rd year of the reign of the 11th emperor of the Qing Dynasty, Kuang Hsu. 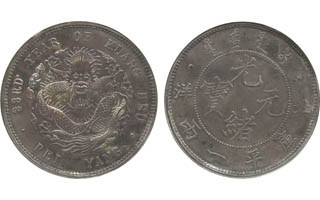 This 1907 Chihli (Peiyang) Province silver 1-tael pattern was struck as part of an effort to adopt tael-denominated coins. The effort failed and most patterns were melted.

Two rare Asian coins from the collection of Swedish-born numismatist Åke Linden are being offered in the April 3 Hong Kong auction being conducted by A.H. Baldwin & Sons.

The first of the two, a 1907 Ku’ping gold 1-tael pattern of Emperor Kuang Hsu, was created as a prototype coin in the 33rd year of the reign of the 11th emperor of the Qing Dynasty, Kuang Hsu.

Emperor Kuang Hsu was put under house arrest after his Hundred Days’ Reform, aimed at changing political, legal, and social proceedings, failed in 1898. The reforms proved too sudden for the Chinese populace and conflicted with the views of Empress Dowager Tsu Hsi, Kuang Hsu’s regent. With military support she staged a coup and Hsu stayed under house arrest until his death in November 1908, one day before Tsu Hsi’s death.

Eduard Kann, in the seminal reference on Chinese coins, Illustrated Catalog of Chinese Coins: (Gold, Silver, Nickel & Aluminum), writes that the gold pattern, and others like it, were produced on the whims of untrained mint directors or the workers trying to please them.

“The mere idea of a large coin in gold inscribed ONE DOLLAR is as ridiculous as it is invalid,” he wrote.

They could have been used for presentation purposes, Kann’s work acknowledges. In any event, collectors accept them today.

The second of the two coins is an extremely rare 1907 Chihli (Peiyang) Province silver 1-tael pattern, also from the 33rd year of the reign of Emperor Kuang Hsu.

The coin was part of an effort to issue tael-denominated coins to compete with the dollar coinage system (the mace and candareen coins), but the tael coinage witnessed little usage and could not compete, according to Kann.

Only a small number were ever made, and most were withdrawn and melted.

Linden bought the coin, which is graded Numismatic Guaranty Corp. Mint State 61, from the 2008 sale by Baldwin’s of the Dr. Norman Jacobs Collection, where it realized a hammer price of $80,000.

The auction is scheduled to be held in the Crystal Conference Centre at the Holiday Inn Golden Mile in Kowloon, Hong Kong on April 3.

The catalog is posted online at www.baldwin.co.uk and online bidding with no additional buyer’s fees is available through the website www.the-saleroom.com.