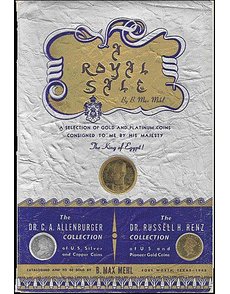 The opulent silver and gold cover of this 1948 auction catalog hints at the coins consigned by King Farouk.

B. Max Mehl was the impresario of the coin auction catalog. Auctioning coins is a high cost proposition. Each auction requires a “headline” collection, meticulous research, quality photography, attractive design and effective promotion.

Only the largest numismatic firms, like Stack’s Bowers Galleries or Heritage Auctions, can boast of having held hundreds of coin auctions. For individual dealers, 50 career auctions is a significant achievement.

B. Max Mehl, a solo practitioner, held a whopping 116 auctions between 1906 and 1955. John W. Adams, in his indispensable two-volume United States Numismatic Literature, has examined — and graded for quality — every auction catalog issued by every major American coin dealer. One quarter of Mehl’s auctions earned an A-minus or better from Adams, mainly due to the quality of the coins cataloged within.

No one could showcase a numismatic collection like Max, as the cover of “A Royal Sale,” featuring coins from King Farouk’s collection, amply demonstrates.

The cover also exemplifies Mehl’s resourcefulness, for the king had refused permission to use his portrait as the cover illustration, so Mehl used an Egyptian coin featuring Farouk on the obverse!

Mehl did not auction every collection he handled; some he bought intact and sold at fixed prices. Prime among them were the large cents of Dr. George French and the encyclopedic collection of Waldo Newcomer, for which Mehl paid a king’s ransom — $220,000 — in 1933, the worst year of the Great Depression.

Max could spend lavishly because he had deep-pocketed customers like Col. E.H.R. Green, son of the “Witch of Wall Street,” financier Hetty Green. Mehl sent catalogs to all four of Green’s homes for six years without a response, before finally cracking the colonel’s sales resistance. Green’s first order was for $1,800, which proved but a rehearsal for his second, which totaled $63,500! Remarkably, Mehl did not conduct a single public auction; all 116 were mail-bid sales. Nor did he enjoy doing business in person.

Mehl told The Saturday Evening Post that he welcomed visits from his customers, entertained them royally, and enjoyed their company, but refused to sell them coins face-to-face. He insisted on conducting transactions by mail because “you can’t do business with people when they come to see you ... they want to talk more than they want to buy.”

Adams notes that Mehl never became a numismatic expert. His price list of Dr. French’s large cents was riddled with errors, and Albert A. Grinnell was so incensed at the mistakes in the catalog when he consigned duplicates from his legendary paper money collection that he later chose dealer Barney Bluestone to sell his front-line bills.

Excepting the first 20, Mehl’s catalogs are relatively common, and sell for about $25 apiece.