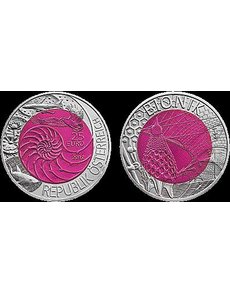 The Austrian Mint marks the intersection of nature and technology, or bionics, with its annual colorful niobium and silver €25 coin. The 2012 coin features a colorful pink niobium center.

Bionics, the intersection of biology and technology, is the subject for the latest ringed bimetallic niobium coin from Austria.

The Austrian Mint on Feb. 22 issued the 10th coin in the annual series; this year’s coin offers a colorful pink center made from the “space age” metal of .998 fine niobium. The 2012 coin celebrates the many ways in which biological systems are applied in solving engineering problems and developing modern technology.

Niobium is a rare soft, gray metal that is found in ore and that has also been known as columbium; with special treatment, the surface layers of niobium can be made to change color, depending on the temperature to which the metal is heated.

The word “bionics” has been around since being coined by U.S. Air Force member Jack Steele in 1958, but the concept has been found in nature for millennia. From the shape of the nautilus shell to the skin of a shark, examples of the engineered advantages of nature are abundant, as evidenced by the design on the Special Uncirculated €25 coin.

The obverse (which was designed by the Mint’s chief engraver, Thomas Pesendorfer) is dominated by a cross-section of the complex nautilus shell, often used as a model for modern design buildings (like the Sydney Opera House in Australia), its shell creating perfect geometric balance all in one compact natural existence.

The eagle above is the inspiration for an aircraft that flies nearby, the plane also connected with a shark at lower left because the plane has an outer surface influenced by the naturally soft, overlapping teeth-like scales found on the skin of a shark.

The scales are arranged in parallel with the swimming direction, reducing drag, a characteristic employed on aircraft for years (and more recently for swimming suits in the 2008 Beijing Summer Olympic Games).

The lotus flower shown in the left center of the silver ring represents the influence of the plant in creating repellents.

The lotus, with its microscopically rough leaves, easily repels dirt and water, channelling both off the leaf. This technology has been applied to everything from dirt repellent paints to self-cleaning windows.

The obverse also shows the country of issue REPUBLIK ÖSTERREICH, meaning “Republic of Austria,” plus the denomination and the year of issue 2012.

The coin’s reverse (designed by Austrian Mint engraver Helmut Waehner) shows an interior view of the Munich Olympic stadium, the roof of which was designed based on radiolarian shells, a complex hexagonal filigree structure that offers great strength with a lightweight structure.

A highly magnified radiolarian shell (which is normally 0.1 to 0.2 millimeter in size) appears in the foreground, taken from an amoeboid protozoa, the natural source for the radiolarian structure.

The building of modern structures and vehicles, including airports in Shanghai and Denver, and the Smart Car, incorporate the use of radiolarian technology.

The legend BIONIK also appears on the reverse of the €25 coin.

The coin includes 7.15 grams of niobium in the center, ringed by 10 grams of silver (the coin is .900 fine). The coin measures 34 millimeters in diameter and has a maximum mintage of 65,000 pieces.

The coin is available from Euro Collections International for $79 U.S., and each coin is encapsulated, boxed and accompanied by a numbered certificate of authenticity.