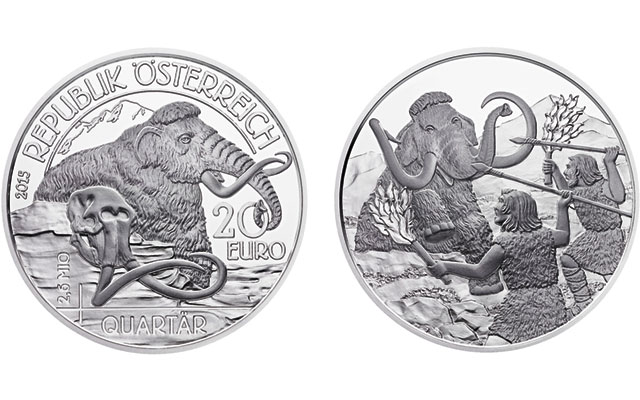 The fifth and final coin in the Austrian Mint’s "Back from the Dead" prehistoric animals series of silver €20 coins targets the woolly mammoth. 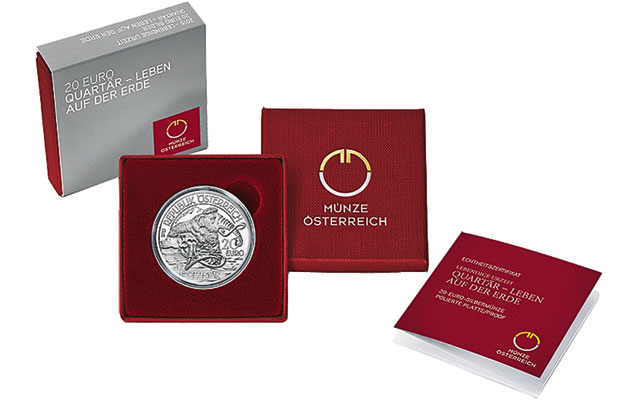 The Austrian Mint’s 2015 Proof .900 fine silver €20 Woolly Mammoth coin is encapsulated, comes with a certificate of authenticity and is packed in a protective case with sleeve.

The wooly mammoth is the final subject of the Austrian Mint’s silver coin series exploring prehistoric animals, known as “Back from the Dead.”

The Austrian Mint is scheduled to release the fifth and final coin in the series on March 18.

The obverse displays a dominating profile of the woolly mammoth, with a skull and massive tusks in the foreground. The timeline that began on the first coin and continues on the obverse of all four previous coins, is seen here to show that the Quaternary Period began about 2.6 million years ago. This side of the coin also includes the country of issue, “Republik Österreich,” the year of issue 2015 and the face value.

The reverse of the coin features an Ice Age hunting scene of two men with torches and spears, ready to capture a mammoth as prey.

The Quaternary Period is the youngest of all geologic periods and continues today.

The continents as we know them today have been located in the same place during this period. During the Quaternary Period, man began standing up and has changed the world ever since.

The Pleistocene Epoch of the Quaternary Period, which lasted from about 1.8 million years ago to about 12,000 years ago, was an extended time of colder weather. During such times up to 30 percent of the earth was covered in ice. Mammoths thrived during cold periods until they died out at the end of the last Ice Age, some 12,000 years ago.

The coin is encapsulated, comes with a certificate of authenticity and is packed in a protective case with sleeve.

The Austrian Mint has developed an augmented reality application for smartphones and tablets to serve as a gateway to the world of dinosaurs and other prehistoric animals.

The free app provides in-depth background information, as well as bringing the long-extinct animals back to "life" with moving images.

The app may be downloaded from the Austrian Mint website or through app stores.

Collectors in the United States and Canada may purchase the “Quaternary Coin” coin issue directly from the Austrian Mint’s website.

To order, visit the website of American Precious Metals Exchange, or Downies, or Modern Coin Mart.

Keep reading about coins in this series:

Austria brings past back to life

Austria's new coin goes back in time to Cretaceous Period

Back from the Dead dinosaurs