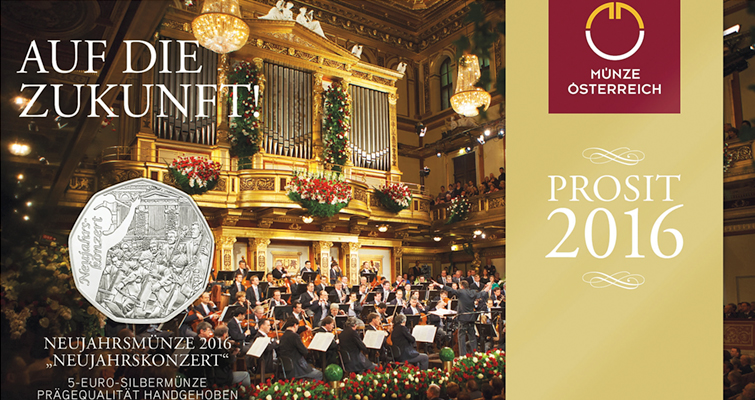 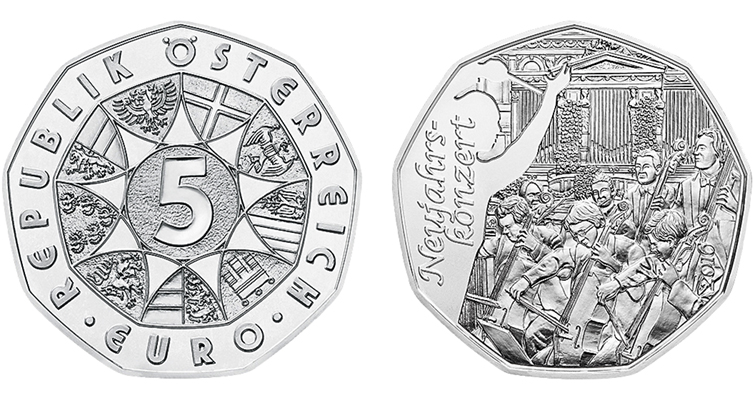 The concert is broadcast worldwide and, as it has for many decades now, marks the beginning of the new year with a message of hope, friendship and peace to the world.

The reverse of the coin depicts part of the cello and string bass section of the orchestra in front of the pipe organ located in the golden hall of the Musik Verein in Vienna. Two detailed panels of abundant flowers decorate the organ for the annual concert. A silhouette of the conductor with his baton and hands above his head is posed along the left side of the design. The words “Neujahrs-konzert” ("New Year’s Concert") is positioned over the conductor’s silhouette. The reverse was designed and engraved by mint engraver Herbert Waehner.

The engravers of the Austrian Mint found this is a particularly challenging theme to depict on a coin, according to mint officials. There are simply so many details, according to the mint. The full orchestra with all the musicians as well as their instruments, the golden concert hall a complex highly detailed architectural wonder and the detail of the pipe organ all added to this challenge. Waehner creatively used a perspective that captures all of this; some musicians, some instruments, and some of the abundant flowers decorating the large pipe organ. A simple view and yet such careful detail that all together the design seems to encompass the myriad of details. A silhouette for the conductor was used by Waehner, since every year a different well-known conductor is invited to conduct the concert by the orchestra for this performance.

The obverse of the nine-sided coin is the standard €5 design, with the denomination encircled by the shields of the nine federal provinces of Austria. In the center is the face value of €5. Mint engraver Helmut Andexlinger designed the obverse.

Televised in more than 90 countries, the concert enjoys great international popularity and touches the hearts of far more people than those lucky enough to find themselves among the audience during the performance in Vienna on the first morning of January. The concert consists mostly of the varied repertoire of the legendary Strauss family and some of their contemporaries. The elaborate florals are the work of florists working for the Vienna Parks and Gardens. The concert hall is transformed by these floral arrangements that take days to complete and install.

The 2016 coin weighs 10 grams, is composed of .800 fine silver and measures 28.5 millimeters in diameter. The coin has a maximum mintage of 50,000 pieces. Each of the coins is vacuum-sealed in a colorful and informative blister pack.

Collectors in the United States and Canada may purchase the New Year’s Concert coin issue directly from the Austrian Mint by way of the website.

The coin is also available from these dealers: