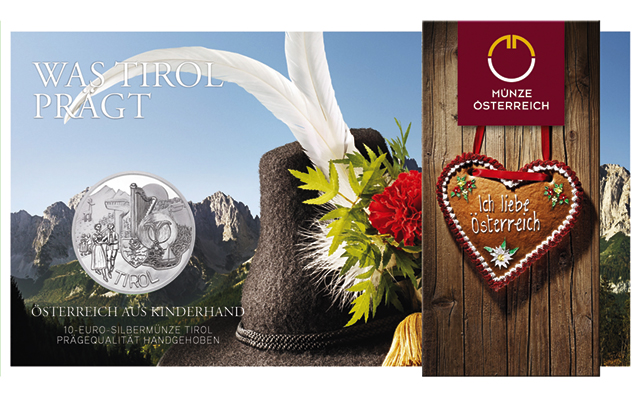 Austria's Brilliant Uncirculated version of the €10 coin honoring the province of Tyrol is offered in a colorful coin card. 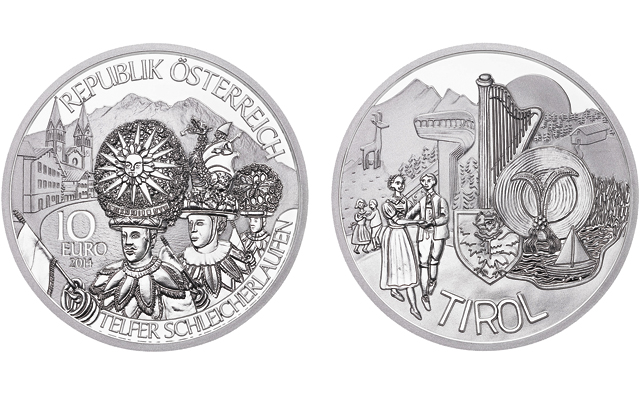 Austria’s latest coin in the Austria, Piece by Piece series designed by children across the provinces honors Tyrol as home of quintessential Tyrolean hats, lederhosen and drindls, along with other elements reflecting the province and its customs.

Few items are identified with Austria or Bavaria more than lederhosen, drindls and Tyrolean hats.

These items and other elements are featured on a 2014 coin from the Austrian Mint’s series Austria, Piece by Piece.

Due for release Oct. 8, the sixth coin in the series celebrates Tyrol. As with other coins in the program, native children in the region assisted with the design.

The coin for Tyrol was designed by a class of 9- and 10-year-old schoolchildren from Rattenberg, which is the smallest town in Austria, having only 400 inhabitants.

The obverse depicts three men in elaborate hats and costumes parading through the center of Rattenberg, the rugged mountain landscape in the background. Pretzels hang from the flagpole carried by the first man in the parade. Austrian houses with traditional architecture and a twin-spired church complete the design along the left side.

The classroom also chose which elements to include on the reverse, which was designed and engraved by mint engraver Herbert Waehner.

The collage effect includes two couples in traditional regional tracht (clothes) dancing, as the sun rises behind snowy mountain peaks. An Ibex stands among coniferous trees at the left, while the Bergisel Ski Jump in Innsbruck is depicted in the center

A shield with the coat of arms of Tyrol rests against the base of a harp, and a small sailboat is shown floating on one of the many lakes of Tyrol.

A total of 30,000 Proof examples are offered, each in a presentation case with a numbered certificate of authenticity. A Special Uncirculated version, packaged in a blister pack with a Tyrolean-themed design on the sleeve, has a mintage limit of 40,000 pieces.

Collectors in the United States and Canada may purchase the Tyrol coin by contacting either Downies or American Precious Metals Exchange, or APMEX, both distributors for the Austrian Mint.

Pricing was not yet set at press time.