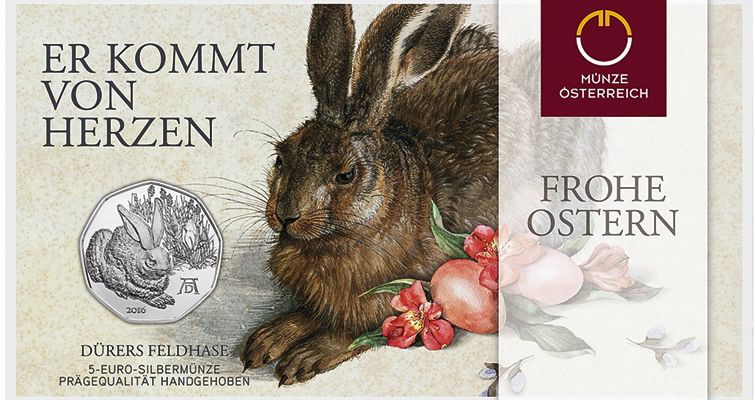 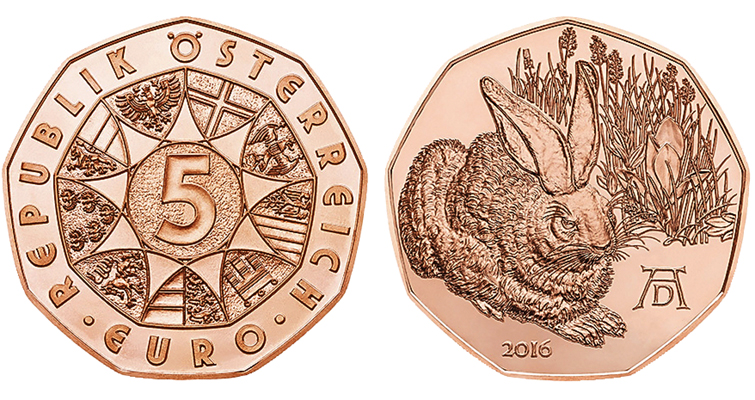 A Brilliant Uncirculate copper version is also being minted at face value for distribution in Austria, but is not available in North America.

The Austrian Mint on Feb. 24 will issue a silver coin featuring a famous European painting of an animal, Albrecht Dürer’s Feldhase (Young Hare).

The reverse bears the classic watercolor of the Young Hare painted by Dürer in 1502. The hare was painted with minute, almost scientific detail, and is considered by some to be almost photographic, according to the Austrian Mint. The hare is depicted alongside a clump of grass and the buds of three crocuses. The coin's reverse design was engraved by the mint’s chief engraver Thomas Pesendorfer.

The obverse of the nine-sided coin has the standard Austrian €5 design, the denomination encircled by the shields of the nine federal provinces of Austria and the face value at the center.

Dürer was born in Nuremberg, one of his goldsmith father's 17 children. Only Albrecht and two siblings survived childhood. His father believed in educating his children and probably wasn’t too happy with the path his son chose. Albrecht became a very prolific painter before his death at the age of 56.

The iconic painting of the Young Hare is in the vast collection of the Albertina Museum in Vienna.

Dürer was among the earliest painters to recognize animals as a subject for art. The fine details of this painting have kept many wondering over the centuries how the artist managed to capture such a detailed image of a wild and constantly moving animal.

The coin has a maximum mintage of 50,000 pieces, each of which is vacuum-sealed in a colorful, informative blister pack.

A Brilliant Uncirculated copper version is also being minted at face value for distribution in Austria, but is not available in North America.

Collectors may purchase the silver Young Hare coin through the Austrian Mint website.

Downies offers the coin online, as does Modern Coin Mart.

Pricing will be established closer to the release date. 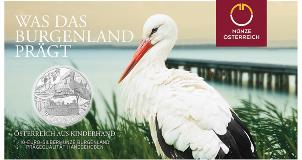 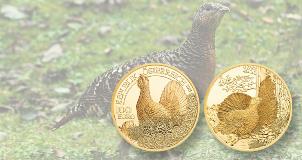 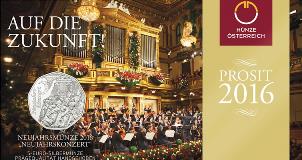