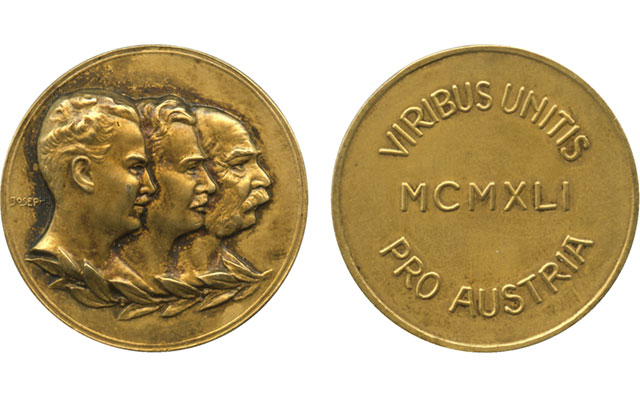 A casual glance at an unfamiliar medal can lead to startling discoveries. An example is a 29-millimeter gold-plated .925 fine silver piece from 1941, bearing three conjoined busts facing right over a laurel branch, with minute artist’s signature JOSEPHU. The reverse bears the Latin legend VIRIBUS UNITIS/ MCMXLI/ PRO AUSTRIA, “By United Strengths, For Austria.”

“Just another of those Austrian things” a casual collector might think from the mottoes, before taking a close look at the edge bearing an incuse MEDALLIC ART CO. NY STERLING. New York 1941, not 1914! This medal is a relic of a very obscure chapter of World War II and the postwar settlements explored by Franklin Delano Roosevelt.

The busts are those of the last reigning Habsburg emperors of Austria, right to left, Franz Joseph; his grand-nephew, Karl, emperor and apostolic king of Hungary; and Archduke Otto.

The Versailles peace settlements partitioned the Habsburg Empire. A new republic of Austria emerged, consisting of the city of Vienna surrounded by scenery, bankrupt, with a shabby present and uncertain future. First called Deutschösterreich, German Austria, its socialist rulers sought Anschluss or union with the neighboring German Republic, but this was prevented by the victorious Allies.

After inflation, civil war and authoritarian rule, Anschluss was achieved by main force in March 1938 when Adolf Hitler’s forces marched into Austria.

Otto had opposed this union and was condemned to death by the Nazis, who were implacably anti-Habsburg. With his mother, the former Empress Zita, he came to the United States, where he worked for the restoration of Austrian independence.

Otto and his mother met with Franklin and Eleanor Roosevelt at their Hyde Park estate and the archduke advocated closer union in postwar central Europe, perhaps under his leadership. His vision of closer union after the war was opposed by Soviet dictator Joseph Stalin and by influential voices in the U.S. State Department.

Pro Austria was Otto’s organization for a free Austria, which was ultimately achieved despite Austria’s division into Allied occupation zones. Otto was barred from postwar Austria until the 1960s, but was a significant leader in the European Union and served in the European parliament with distinction in 1979 to 1999.