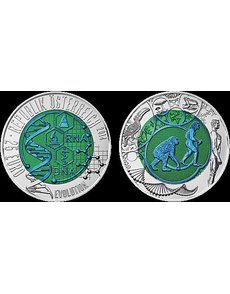 The Austrian Mint continues its annual ringed-bimetallic silver and niobium 25 euro coin series in 2014 by honoring the scientific theory of evolution. The issue is the first time that the niobium center has been treated to appear with two different colors. 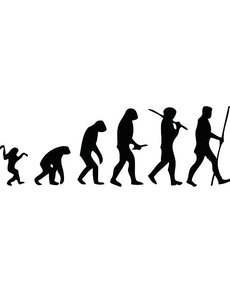 A portion of the coin’s reverse resembles this graphical depiction, similar to Rudolph Zallinger’s familiar image known as “The March of Progress.”
Previous
Next

The coin, which honors the scientific theory of evolution, is the first in the world to offer two different colors within the niobium component, according to the Austrian Mint.

The Special Uncirculated 25 euro coin is struck with a ring of .900 fine silver surrounding a .998 fine niobium center. The color is visible because of the way light refracts on the thin, transparent oxide layer on the niobium, an affect achieved through heat treatment. The niobium core of the 2014 coin has a greenish background and an aqua blue relief.

The coin, which will be released Jan. 22, was designed and engraved by Austrian Mint engraver Helmut Andexlinger. It is the 12th in an annual series of colorful ringed-bimetallic silver/niobium 25 euro coins that began in 2003.

The obverse of the 2014 coin depicts DNA (deoxyribonucleic) as well as RNA (ribonucleic acid) — the keys to evolution. This side of the coin also bears the country of issue republik Österreich (meaning Republic of Austria), the face value and the year of issue, 2014.

The coin’s reverse deals with the history of human development and the diversity of forms of life brought about by evolution. Andexlinger includes a somewhat stylized DNA chain on the reverse.

Three hominid figures also appear in the reverse, recalling the famous graphic “The March of Progress” created by Rudolph Zallinger for F. Clark Howell’s book Early Man, published by Time-Life. The scene is well recognized, copied and parodied the world over.

A toucan represents life’s abundance in the air. A fish and frog represent life in the water and how life evolved into land-based creatures. A mushroom is also included because it is a very complex biological organism.

Air bubbles surround most of the primary design elements, representing the role oxygen plays in life.

Andexlinger worked with Dr. Renée Schroeder, member of the Faculty of Medicine as well as a professor at the University of Vienna, to identify key design elements for the coin.

The coin weighs 15.5 grams (9 grams of silver and 6.5 grams of niobium) and measures 34 millimeters in diameter.

The coin has a maximum mintage of 65,000 pieces and costs $95 from distributor Downies.