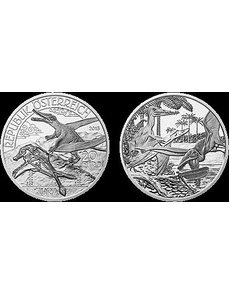 Austria’s newest entry in the Prehistoric Life series celebrates the Jurassic Period, and “Life in the Air,” with a special nod to the pterosaur Rhamphorhynchus. 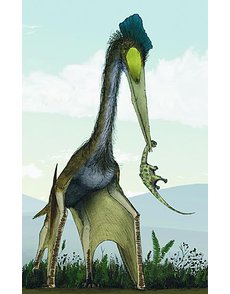 Many species of pterosaurs existed, some large, as shown, and some small.

Past is present, again, for the Austrian Mint’s newest collector coin.

The mint plans to release the second coin in the Prehistoric Life series on Sept. 11. The newest entry in the Proof .900 fine silver five-coin series honors the Jurassic Period and celebrates “Life in the Air.”

The series presents depictions of dinosaurs and early life in the water, on land and in the air of middle western Europe, from the Triassic to the Quaternary period.

The reverse of the coin shows what life may have been like during the Jurassic Period. A pair of flying Rhamphorhynchus (a type of pterosaur) is depicted hunting a giant dragonfly at the water’s edge. Lush tropical vegetation, including ferns and palm tree-like cycads, appears in the background.

The obverse of the coin depicts a Rhamphorhynchus, with its long tail, broad wingspan and needle-like teeth angled forward in its snout.

The Rhamphorhynchus stands on a fossil of itself that is on view today in the Natural History Museum in Vienna.

Below the fossil on the obverse is a timeline that details the Jurassic period from 200 million to 145 million years ago. This timeline will be continuous from the first coin through to the final coin of this series.

The obverse also includes the country of issue, REPUBLIK ÖSTERREICH, the year of issue 2013 and the face value of ?20.

The reverse of the coin was designed and engraved by Helmut Andexlinger.

The obverse was designed by Thomas Pesendorfer.

The Rhamphorhynchus was less than a foot long but had a wingspan of 3 feet.

With tiny feet and a tail, it belonged to the pterosaur class of primitive flying reptiles with short bodies and large wing spans.

The new coin weighs 20 grams, measures 34 millimeters in diameter and has a mintage limit of 50,000 pieces.

Collectors in the United States and Canada may purchase the Jurassic coin for $75 U.S. each from Downies.

To order the Jurassic coin, or for more information, email the firm at downiesUSA@downies.com or telephone it at 1-877-897-7696. ¦