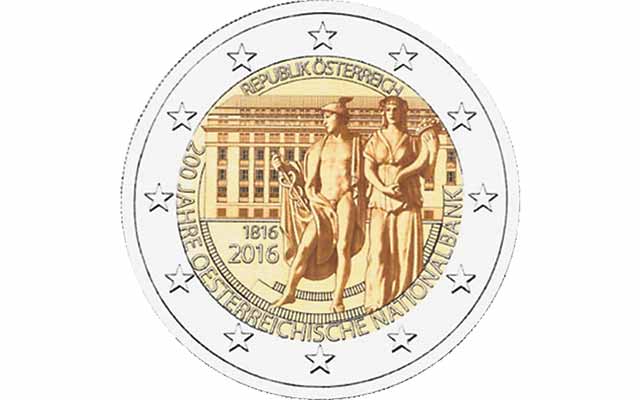 Austria will mark the bicentennial of the nation’s central bank with a circulating commemorative €2 coin in 2016.

The Austrian Mint will issue a circulating commemorative €2 coin in 2016 to celebrate the bicentennial of the Oesterreichische Nationalbank, or the Austrian National Bank.

The obverse design depicts two gods of Roman mythology that are featured in the carved relief above the entrance to the bank's main building: to the left is Mercury, the messenger of the gods and the god of merchants and commerce; to the right is Fortuna, the goddess of fate and prosperity, who is portrayed with a horn of plenty.

The background setting, running from the left to the right edges of the core, shows the bank’s main premises. An ornamental band hugging the bottom of the coin center evokes the red-white-red pattern of the Austrian national flag, with hatched vertical lines symbolizing the color red, as laid down in the rules of heraldic design.

The years 1816 and 2016 to the left of Mercury refer to the bank’s founding year and its bicentennial. The inscriptions translate to “Republic of Austria” and “200 years of the Austrian National Bank.”

In total, according to a notice in the Official Journal of the European Union, 16 million coins are to be issued at some point in 2016.