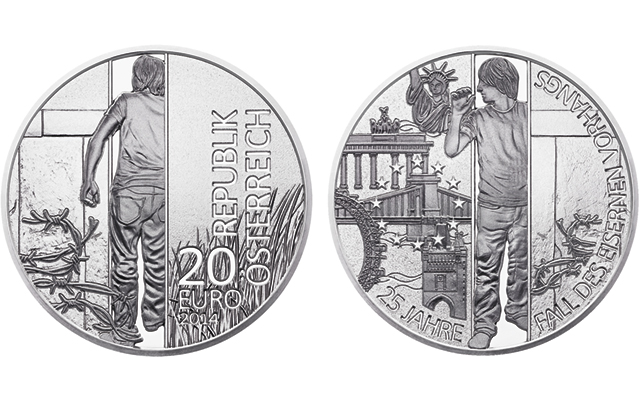 Austria’s new Proof silver 20-euro coin will honor the fall of the Berlin Wall. A young man is seen on both sides of the coin, representing the journey from the East to the West shortly after the Wall began coming down. 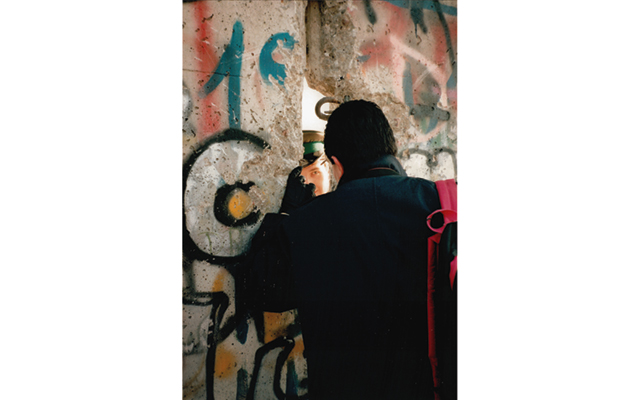 An Eastern guard speaks to a Westerner through a broken seam in the Berlin Wall on Nov. 26, 1989, just weeks after the wall began coming down.

The fall of the Berlin Wall 25 years ago was not accomplished with one thunderous crash of heavy machinery, but rather with many swings of hammers and small acts of defiance.

The Austrian Mint honors Austria’s role in the weakening of the Berlin Wall with a new Proof 2014 .900 fine silver 20-euro coin due for release June 25.

The obverse shows a young man cutting through the wall, leaving behind the communist world on the left side and going toward freedom and greener grass on the right side.

The reverse shows the man coming through the wall and into freedom. The barbed wire is now behind him and he looks toward global symbols of freedom: the Statue of Liberty, the Brandenburg Gate (which was on the very front of this wall), the Elisabeth Bridge connecting eastern Hungary to the West, the giant Ferris wheel of Vienna and the Charles Bridge in Prague. Superimposed on these elements are the stars of a free and united Europe.

While the wall officially fell Nov. 9, 1989, the Iron Curtain began to show weakness earlier that year, notably when the foreign ministers of Austria and Hungary met on June 27 at the barbed wire fence along the border separating the West from the East.

Together the men used a heavy wire cutter to cut through the barbed wire, marking the beginning of the end of communism in Europe.

Within five months of the Nov. 9 breech in Berlin, the barrier between the East and West had been eradicated, save for a kilometer-long portion retained to remind people of its legacy.

The wall was 155 kilometers long, with watchtowers, anti-vehicle ditches and dog runs intended to deter would-be escapees. An unknown number of easterners tried to escape, and hundreds died in the attempts, some shot and killed by guards, others inadvertently in their own escape efforts (such as drowning) or by committing suicide after being caught.

Today a line in the city of Berlin is built into the streets to show where the wall used to stand.

Collectors in the United States and Canada may purchase the Berlin Wall coin from American Precious Metals Exchange and Downies.