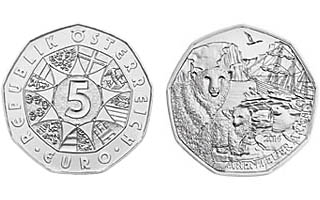 Austria’s Vienna Zoo expands its polar bear exhibit in May, and the Austrian Mint celebrates with a new silver 5-euro coin. 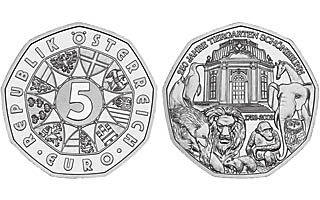 Vienna’s Zoo was built at Schönbrunn Palace in 1752 and now bills itself as the world’s longest continually operating zoo. A silver coin in 2002 for the 250th anniversary was the world’s first 5-euro coin.

Austria’s newest commemorative coin celebrates the opening of a new polar bear enclosure at Schönbrunn Zoo, which is scheduled to be ready this summer.

The Schönbrunn Zoo, or Vienna Zoo, calls itself the world’s oldest continually operating zoo. It was founded in Vienna on the grounds of Schönbrunn Palace in 1752, and today is a UNESCO World Heritage Site.

A mother polar bear and her cub appear on the reverse of the coin along with a curious walrus taking in the scene. To the right is a late 19th century sailing ship in the ice flows of the polar cap. The design references the polar expedition in 1873 that was sponsored by Emperor Franz Joseph. The explorers were stuck in the floes for a year, giving them time to perform research.

The polar bear enclosure will be part of the area in the zoo known as “Franz Joseph Land,” which is also the name of an area of islands that now belong to Russia. The expedition was the first to report finding the islands.

This is the second time Austria has commemorated its zoo with a coin; for the zoo’s 250th anniversary in 2002 the Austrian Mint issued the world’s first 5-euro coin.

Founded by Emperor Franz-Stephen I, the zoo was arranged around a beautiful building known as the Kaiserpavilion or Emperor’s Pavilion. The Kaiserpavilion appears on the 2002 coin’s reverse, along with an assortment of animals including a penguin, a giraffe, an elephant, a lion and an owl.