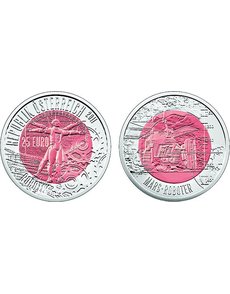 Austria’s newest ringed bimetallic €25 coin with a colorful niobium core celebrates robotics. A “Vitruvian” robot graces the obverse, and the Mars Lander appears on the reverse.

Applications of robotic technology vary from the solemn duty of protecting soldiers to mundane household chores like vacuuming, from the terrestrial (in manufacturing) to the celestial (space exploration).

The 2011 coin is the first to feature a niobium core that has undergone oxidation prior to striking.

Niobium is a rare soft, gray metal that is found in ore. With special treatment, the surface layers of niobium can be made to change color, depending on the temperature to which the metal is heated.

The core of the 2011 coin features a reddish pink hue.

The obverse of the coin, designed by Austrian Mint engraver Helmut Andexlinger, features a robot in a humanoid form posed as the Vitruvian Man of Leonardo da Vinci.

The Vitruvian-like robot stands on lines of zeros representing the thousands of lines of binary code required to program a robot.

To the right side of the robot are three cogwheels emblematic of the inner mechanics of a robot. The binary code and the cogwheels represent the electronic and mechanical worlds that are required for developments in robotics.

The reverse of the coin, designed by Austrian Mint Chief Engraver Thomas Pesendorfer, depicts a robotic lander on the surface of Mars — the reason the coin sports a deep reddish-pink color.

A mountainous Martian landscape covered with boulders is in the background.

In a first for the series, the niobium core for the 2011 coin was oxidized prior to striking, a different and separate process from the heat treatment used to create the color, according to Kirsten Petersen, the Austrian Mint’s director of international markets.

The flow of metal during the striking process determines how the shimmer effect appears and therefore each coin has a unique color.

The coin has a maximum mintage of 65,000 pieces and costs $74 in the United States and Canada.