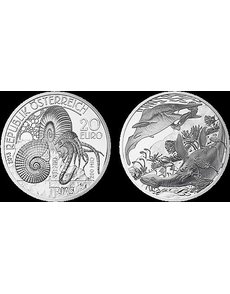 Austria’s newest collector coin breathes life into the prehistoric past. The Proof .900 fine silver 20 coin for the Triassic period is the first of five to celebrate prehistoric Europe.

A new coin series from Austria — and the app being created to accompany it — together help bring prehistoric Europe back to life.

The inaugural coin in the Austrian Mint’s Prehistoric Life Back From the Dead series is being released April 17.

The five-coin series features dinosaurs and other early life in the water, on land and in the air of middle western Europe from the Triassic to the Quaternary periods. This first coin in the series of Proof .900 fine silver 20 coins features the Triassic period.

Designs of the past

A lifelike interpretation of an extinct type of a cephalopod (on display in a museum in Vienna), looking somewhat like a nautilus shell, appears on the obverse of the first coin. Joining the scene are the face value, and a partial timeline, which will advance as a design element through the remaining coins in the series.

The obverse, designed by Mint engraver Helmut Andexlinger, also includes the country of issue, REPUBLIK ÖSTERREICH, and the year of issue, 2013.

The reverse was designed and engraved by mint engraver Herbert Waehner. On the reverse, an ichthyosaurus holds an ammonite in its jaws. Below the ichthyosaurus swims a nothosauras. Both animals lived in seas during the middle and upper Triassic period in the area of today’s Mediterranean Sea. A variety of flora are shown floating in the water around them.

The period comes back to life, beyond the design of the coin, through the application developed by the Austrian Mint with the Natural History Museum of Vienna.

Users may download the augmented reality app for their smartphone or tablet for free from a special page at the Mint website, www.muenzeoesterreich.at/urzeit/
eng.

With the app operational, holding the device over provided documents will allow the dinosaur to be viewed in 3-D, moving either as a skeleton or fully fleshed, with audio effects.

The new coin weighs 20 grams and has a diameter of 34 millimeters.

Each coin in the program has a maximum mintage of 50,000 pieces. The coin is priced at $75 in U.S. funds, and a black collector case for all five coins may be purchased separately for $69.

To order, in the United States or Canada, telephone Euro Collections International toll free at 877-897-7696, or visit online at www.eurocollections.com. ¦