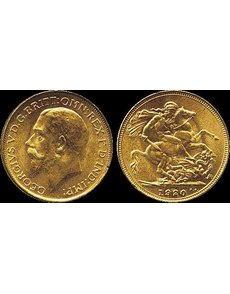 That is a record price for an Australian coin, according to representatives from A.H. Baldwin & Son, which sold the second part of the Bentley Collection during Coinex week in London.

The coin also established record prices for a British Imperial gold sovereign, for a British Colonial coin and for a 20th century British coin.

The coin, struck at the Sydney Mint, is one of the rarest Australian coins. It is one of four known circulation-strike examples (a specimen Proof also exists). Three of the circulation strikes are available for private ownership.

The auction was a high drama sale and the 1920-S sovereign was the jewel of the Bentley Collection.

It was later discovered that the bidder placing the first bid was Bob Jaggard of Jaggard’s, the Sydney coin dealers, bidding on behalf of an anonymous client. A U.S. buyer in the room came in at £270,000, followed by a gentle ping pong of bidding with Australia versus the United States. For the first round of bidding, Jaggard and the unnamed American were the only bidders.

Then there was a near disaster when the line from Australia went dead — the coin was then with the American gentleman at £340,000.

“That has never happened to me before on such a high profile coin,” Hill said. “I shouted out ‘Hold on!’ to the auctioneer and jabbed the redial button. It only took a few seconds to get through, but it seemed like an age.”

The bidding between bidders in Australia and the United States continued throughout the second half of the £300,000s. However, the pace slowed when the £400,000 barrier was broken. Bidding then went up in £20,000 steps.

At £440,000 the coin was with Jaggard in Australia. The American bidder was clearly approaching his limit and asked the auctioneer if he would accept a bid of £450,000. The auctioneer agreed. The Australian bidder came in via Hill with £460,000.

Just as Jaggard most probably thought that after a two-bidder contest the legendary sovereign was most likely his, a third bidder, an Englishman, stepped into the bidding arena with a bid of £480,000. The atmosphere in the bidding room became more intense.

The volleys between the Australian and the British bidder continued. At £550,000 the game became a little slower, but the price continued to rise until it was with the Englishman at £640,000. Hill bid £650,000 on behalf of Jaggard. The Englishman declined to raise the bid and the hammer fell. The coin was destined to return to Australia, to Jaggard for a buyer who wishes to remain anonymous.

What makes the Sidney Mint 1920 sovereign so special?

Although record’s show 360,000 sovereigns were struck at the Sydney Mint in 1920, how many were actually dated 1920 is a matter of conjecture.

Some researchers believe that many 1920-dated coins must have been melted down; others think that 1919-dated coins are included in this calendar mintage figure. Either way, collectors only began to discover the true rarity of the coin in the second half of the 20th century.

The newly record-breaking coin was struck from a rusted reverse die (which is usual for the circulation-strike 1920-S sovereigns). Apart from minor imperfections and light handling marks, it is otherwise practically As Struck.

Other highlights from the second part of the Bentley Collection include:

? A Melbourne Mint pattern sovereign 1879, by William Wyon. It is one of only two examples known, the other being in the Melbourne Mint Collection. It is not illustrated in Wilson Rasmussen’s work on gold patterns and Proofs. Apart from four tiny black spots, it is in Brilliant Mint State. It sold for £48,000 (U.S. $77,632) against an estimate of £12,000 to £15,000.