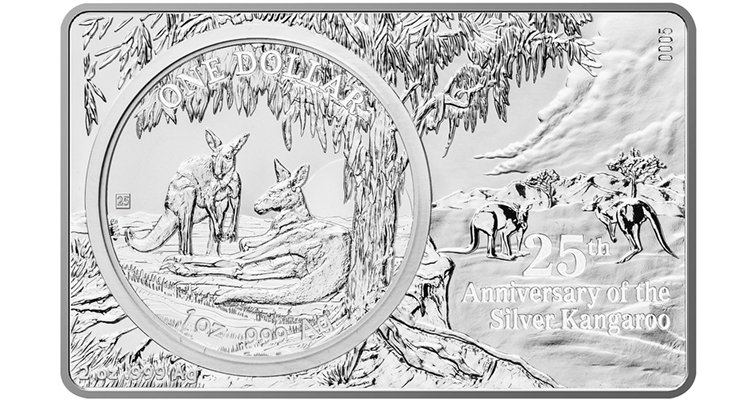 The Royal Australian Mint’s annual Kangaroo silver coin is available as part of a coin-and-bar set.

Australia’s Kangaroo series has been a mainstay of Australian numismatics since 1993.

To celebrate the 25th anniversary of the program, the Royal Australian Mint and German coin distributor MDM have partnered to issue a coin and bar combo set. The set includes the 2018 Kangaroo 1-ounce silver coin, with a 2-ounce bar (bearing a special design) surrounding the coin.

Beginning with an image that echoes the reverse of the Australian penny from 1937, the Kangaroo series has appeared in various forms and with various themes over 25 years. Each annual release depicts different aspects of Australia’s beloved kangaroo, from its contribution to Australian biodiversity to its role as a cultural icon.

The 2-ounce silver bar includes an opening filled with the Frosted Uncirculated 2018 Seasons Change 1-ounce coin, which shows on its reverse a pair of kangaroos lounging in the shade. A special 25 privy mark is added to the coin in the set.

The Frosted Uncirculated version (without the privy mark) has a mintage limit of 5,000 pieces and is available singularly for $80 Australian.