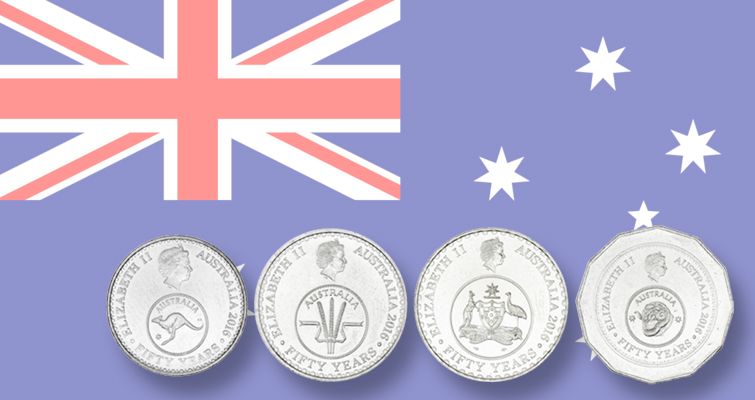 The Royal Australian Mint has released 2016 circulating commemorative coins to honor the 50th anniversary of decimalization in 1966. The four fractional denominations are currently available, with the $1 and $2 coins due for release in August and September, respectively. 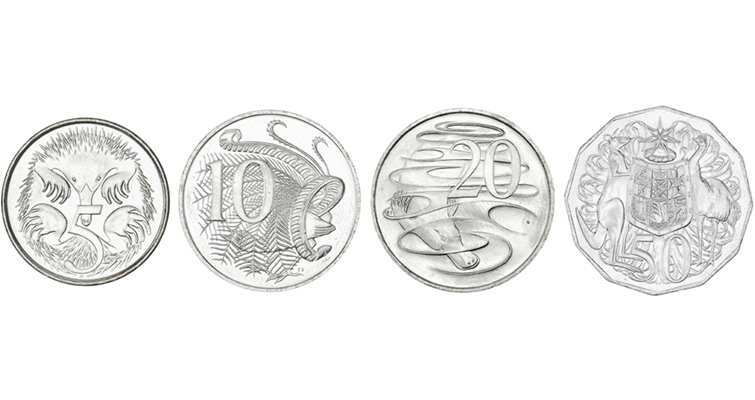 Australia's 2016 circulating coins marking the 50th anniversary of decimalization feature the standard designs in use since the switch in 1966.

The Royal Australian Mint has issued 2016 circulating commemorative coins to celebrate the 50th anniversary of decimalization.

These coins feature the normal reverses they have carried since decimalization began, but have modified obverses featuring a miniaturized version of the current portrait of the queen, a miniaturized image of the reverse design from a pre-decimal denomination, and an anniversary inscription.

In addition, the 5-cent coin in the program is Australia’s first circulating commemorative 5-cent coin.

The four fractional denominations of copper-nickel coins are released, with $1 and $2 coins due for release Aug. 1 and Sept. 5, respectively.

The four fractional coins carry the standard reverses that were introduced for decimalization in 1966: echidna (5-cent coin), lyre bird (10-cent piece), platypus (20-cent coin), and coat-of-arms (50-cent coin). The $1 and $2 coins feature the standard designs that have appeared since those denominations debuted, the Mob of ‘Roos design on the $1 coin since 1984 and the Australian Outback aborigine design on the $2 coin since 1988.

The obverse of each coin continues to carry the Ian Rank-Broadley effigy of Queen Elizabeth II, though in a much smaller rendition than on standard coins and positioned above a miniature version of the pre-decimalization reverse design. An inscription encircling the central design elements includes a reference to the coinage anniversary.

Designs for the $1 and $2 coins were disclosed with the sale of the 2016 Proof set from Australia. The obverse of the circulating $1 coin will include a miniaturized version of the crowned coat of arms from the reverse of the florin of 1938 to 1963, and the $2 coin bears the crown design that appeared on the reverse of the 1937 and 1938 crown.

The Royal Australian Mint offered 5,000 rolls of each of the four fractional denominations; the 5- and 10-cent coin rolls each contain 40 coins, and the 20- and 50-cent coin rolls contain 20 coins each.

United States dealer Joel Anderson has acquired examples of the first four coins and is selling them for $13 per set including shipping to a U.S. address. To order, visit his website. 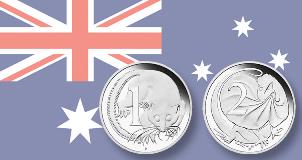