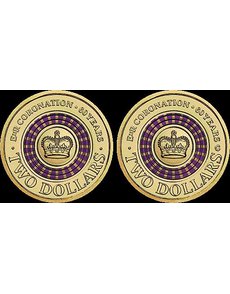 The Royal Australian Mint celebrates the coronation anniversary of Queen Elizabeth II with a colorful circulating $2 coin. The collector version, bearing the C Mint mark for Canberra, is depicted. It is available at a premium.

The Royal Australian Mint’s June 17 unveiling of a new circulating commemorative $2 coin with a splash of color is a crowning achievement for the mint Down Under.

The purple-infused coin celebrates the 60th anniversary of Queen Elizabeth II’s coronation. The coin is the second colorful coin the RAM has issued for circulation. The first was a $2 coin with a red poppy released in October 2012.

Two million Coronation $2 coins are being released, quadruple the amount of the Poppy $2 coin released.

The $2 coin, in both standard and colorful versions, is composed of a copper-nickel, aluminum and nickel alloy. It weighs 6.6 grams and measures 20.62 millimeters in diameter.

Following the RCM’s lead, the RAM is also making examples of the new coins available to the public at face value (plus postage) for a limited time, in an effort to boost interest in coins and collecting. Five-packs of the new Coronation $2 coin are due to become available on June 21, for $10 Australian, with a purchase limit of one package per customer.

A special collector version with the C Mint mark for the Canberra Mint, which is home to the RAM, is available individually with an unlimited mintage and in special packaging, with a retail price of $12.95 Australian.

To order from the Royal Australian Mint, send email to info@ramint.gov.au or visit www.ramint.gov.au.

Downies will carry the special edition version, individually priced at $12.75 U.S. plus shipping and handling.

To order from Downies, telephone the firm at 877-897-7696, email it at downiesUSA@downies.com or visit online at www.downies.com. ¦