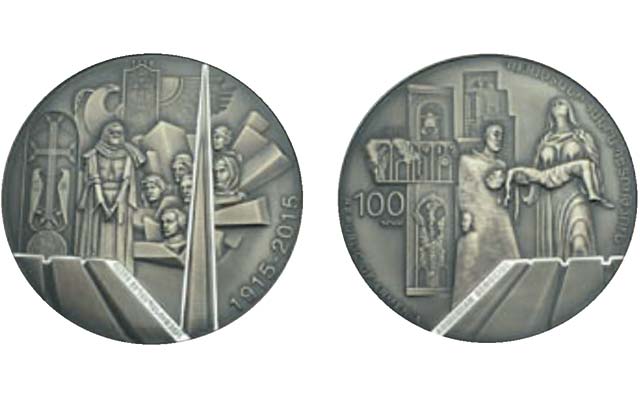 The centennial of the Armenian Genocide is marked on a silver 100-dram coin from Armenia.

Images courtesy of the Central Bank of Armenia.

Commemorative coins often celebrate moments of national pride or individual achievement, but a 2015 noncirculating legal tender coin from Armenia serves as a somber reminder of tragedy.

The Uncirculated Antique Finish .925 fine silver 100-dram coin marks the Centenary of the Armenian Genocide, which began in 1915 as the mostly Islamic Turks sought to eradicate a minority Armenian Christian population residing in what is now modern-day Turkey.

In a few years, the population of some 2 million people was reduced by 50 to 75 percent, with many of the living left homeless and destitute.

The relationship between the two populations remains strained in the modern era, with Turkey refusing to accept the term “genocide” for the systematic killing of its Armenian population.

Multiple memorials to the genocide are found around the world.

Both sides of the coin bring elements of some of those memorials together, including a stone cross at a memorial in Glendale, Calif., depicted on the obverse.

In addition to the U.S. memorial, the coin depicts memorials in Armenia, and Belgium, Brazil, France, Russia, and Syria, reflecting the widespread Armenian diaspora.

The coin was designed by Suren Simonyan and Aram Urutyan, and struck at the Lithuanian Mint.

The coin weighs 67.2 grams, measures 50 millimeters in diameter and has a mintage limit of 1,000 pieces.

Collectors interested in obtaining this coin will have to search the secondary market, as most of Armenia’s coins have no robust distributor network.