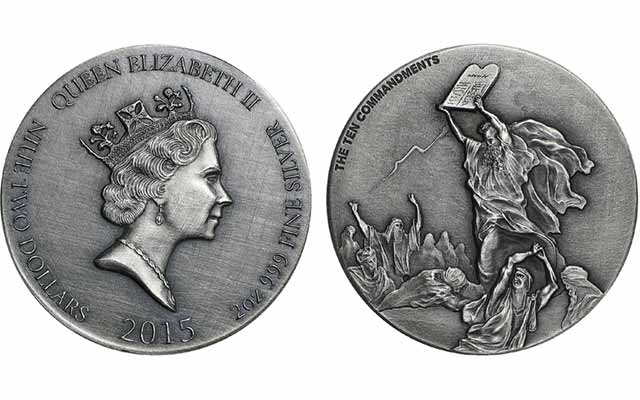 The newest 2015 coin from the Scottsdale Mint's Biblical series showcases Moses and the Ten Commandments. The 2-ounce silver coin has an antique finish and 1,499 piece mintage limit.

The 2015 2-ounce silver $2 coin in the name of Niue depicts the powerful image from Exodus 32:19, showing the moment just before Moses breaks the tablet of commandments after coming down from Mount Sinai and seeing his people violating the Ten Commandments that God had just bestowed on them.

“The smashing of the tablets symbolized these people had willfully broken God’s designed relationship of mutual faithfulness and that without His further deserved mercy, they were doomed,” according to a press release from APMEX.

The coin features a rimless, high-relief design with an antique finish.

The creative team at the U.S.-based Scottsdale Mint designed the reverse of this .999 fine silver piece, inspired by master French craftsman Gustave Doré’s original 1860s wood carving of “Moses Breaking the Tables of the Law.”

The Ten Commandments coin has a limited mintage of 1,499 coins. Two additional coins are slated for release from the Biblical series in 2015.

Each coin comes with a certificate of authenticity telling the story of the coin and minting specifications and lists a unique serial number that matches the laser-etched number on each coin. The certificate also features the Doré artwork that served as inspiration for the design.

Want to see the earlier coins in the series? Coin World has you covered!