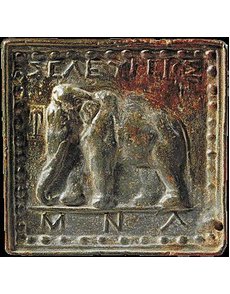 An ancient weight from the Seleucid Empire shares design elements with coins that are based on the weight standard it represents. This weight realized ?23,600 ($32,476 U.S.) in a Dec. 18 auction. 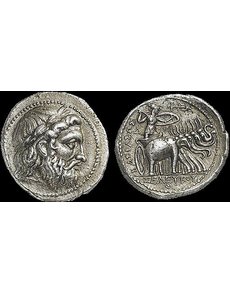 An Extremely Fine silver tetradrachm of Seleucus I Nicator from Seleucia at the Tigris, in what is modern-day Iraq, was issued sometime after 296 to 295 B.C.

The connection between coinage and systems of weights dates to ancient times.

As the Greek civilization developed, the concept of Nomos (or law, custom, measure and even weight) was integral to contracts, commerce and daily life.

In ancient Greece, varying weight standards were employed at different times, as established by each city. Many ancient weights feature symbols of power that also appear on coins, as an expression of governmental rule. Without that foundation, “it was impossible to conclude a contract, whether for the sale of a house, for a marriage, or for a small transaction when an object changed hands,” according to auction firm Gorny & Mosch.

An elephant depicted on a weight sold on Dec. 18 in Gorny & Mosch’s auction No. 218 of ancient art recalls certain silver coinage of the Seleucid Empire.

The bronze weight dates to the third century B.C., weighs 457 grams and measures 105 millimeters by 102 millimeters. Its value, calculated as a mina or mine, is indicated by the inscription MNA. It exhibits a green patina.

On the weight, a single elephant stands to the left, with a countermark in the shape of an anchor in front.

The weight offered in the auction originated in Seleucia, but according to the auction firm, the inscription alone does not confirm which of many cities bearing that name it represents. Both elephant and anchor are iconographic symbols for the rule of the Seleucid dynasty.

Evidence of the weight’s origin can be found on the reverse of a silver tetradrachm of Seleucus I Nicator from Seleucia at the Tigris, in what is modern-day Iraq, issued sometime after 296 to 295 B.C. Athena rides in an elephant quadriga and an anchor is shown above in the field.

Silver in the weight of a mina (today measured usually at 450 grams), for instance, was worth 192 drachma, according to a chart by Shraga Quedar in Ancient Scale Weights and Pre-Coinage Currency of the Near East by David Hendin.

The shekel of the period was also a measure of weight of precious metal, which gave way to a coin with the same denomination.

Another example of the Seleucid mina weight in the Getty Museum weighs 535 grams.