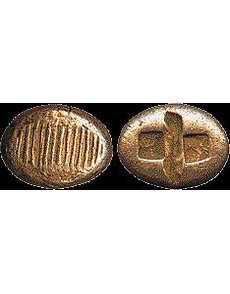 An ancient coin topped all bidding during British auction house Baldwin’s 70th auction, which was one of three sales the firm held in conjunction with Coinex, the largest British coin show.

The stater, which numismatists generally consider an example of the first true coin, bears an obverse design type as well as a reverse punch. Prior to this, currency took the form of small ingots with blank surfaces, followed by the addition of a reverse punch and eventually a striated obverse, according to the catalog.

The lot was one of 934 total lots offered in the auction, which realized £381,429 ($594,976 U.S.) with the fee. The Sept. 28 auction featured ancient Greek, Roman and Byzantine coins, and a collection of English copper and bronze coinage in a consignment described as “the property of an English gentleman.”

Additionally, the auction featured paper money of the Siege of Mafeking during the Boer War, and a small but historical selection of orders, decorations and medals.

All lots from the firm’s 70th auction can be viewed at www.baldwin.co.uk/auction-70.