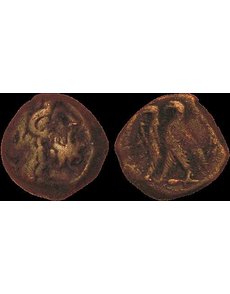 Almost 40 years later, Coin World gets to take a second look at a reader’s ancient coin. The current opinion on its identity remains the same as the original opinion offered by Russell Rulau in 1973.

What can you tell me about this coin, passed down to me by my grandfather?

Mr. Ferrell’s email to “Readers Ask” included obverse and reverse images of the coin. It also included a photo of an Aug. 2, 1973, letter sent to Mr. Ferrell’s grandfather, written by Russell Rulau, then employed by Coin World.

In the typewritten letter, Rulau writes:

“Thank you for your recent letter.

“We believe your bronze coin was struck by one of the Ptolemies of Egypt, possibly 100 or 200 years before Christ. We are unable to detect sufficient legend on the coin to identify the Mint or specific ruler.

“Attributed, the piece would probably retail for $7.50.

“Thank you for your interest in Coin World.

David Vagi, who currently writes Coin World’s “Ancients Today” column, agrees, stating, “Since the coin is quite worn, 100 percent identification is not possible, but I would be really surprised if it was not the following:

As for its current value, it has probably not dramatically risen — perhaps to $20 to $25.

For those new to coin collecting, the many letter and number combinations used to describe coins can seem maddening to master at first. However, with more exposure to the hobby and accessing reliable information, even a beginner will start to easily decipher the “lingo” in a short amount of time.

In this instance, “MS” stands for Mint State, or a coin in Uncirculated condition. The numbers 63 and 65 are just a smaller breakdown of the hobby’s 70-point grading scale, with numbers 60 through 70 denoting coins that are Uncirculated, and numbers 1 through 59 denoting coins that display various degrees of circulation wear. In short, the higher the number, the better the grade.

A much more detailed explanation of grading terminology is contained in the 2012 Guide to U.S. Coins. For those with access to this book, consult Chapter 7 — “Grading Coins” — which begins on Page 315 of the book.