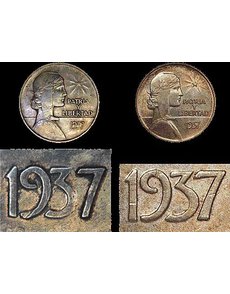 Side by side, little difference is evident between the altered date 1937 Cuban peso, top left, and an unaltered genuine piece, top right. Close-up images tell the story. On the altered date, bottom left, the numeral 7 was added, and the 7 and 3 are further apart than on the genuine date, bottom right. The width of the upright and crossbar of the added 7 is uniform throughout on the altered coin, and color and texture are different from other digits in the date.

The Cuban 1937 peso is a scarce issue for collectors.

Also referred to as the “ABC Pesos” (named after the ABC Party that was in power at the time), Cuban silver 1-peso coins were struck by the United States Mint from 1934 to 1939. The same planchets that were used for U.S. silver dollars were used for the Cuba 1-peso coins. Similar to the treatment of U.S. silver dollars, nearly all of the Cuban pesos were stored in vaults, and many were eventually melted, never having been used in actual circulation.

ANACS recently had the opportunity to inspect two examples of the Cuban 1937 peso. The first coin was in typical condition for this issue — lightly worn and mishandled. The second example had an odd look to it, and after a few minutes of research it became obvious why it looked “funny.” The last digit had been removed from a genuine peso, and a fake 7 had been carefully added to a genuine peso of a different date.

Also, there is very little space between the 3 and the 7 in the date.

When you compare this description to the fake 7, the alteration is easy to spot. The width of the upright and crossbar of the added 7 is uniform throughout, and there is much more space between the 3 and the 7 on the fake coin. Under strong magnification, the color and texture of the added 7 appears to be different than the other digits in the date, but the average collector armed only with a loupe will not be able to spot this diagnostic.

As is often the case in numismatics, when there is a profit motive, counterfeiters and alteration experts will take advantage. In this case, changing a $50 coin to a $1,000 coin with a simple date alteration is certainly worth their time and effort. As collectors, we need to be aware of situations like this one, and arm ourselves accordingly to avoid being burned.