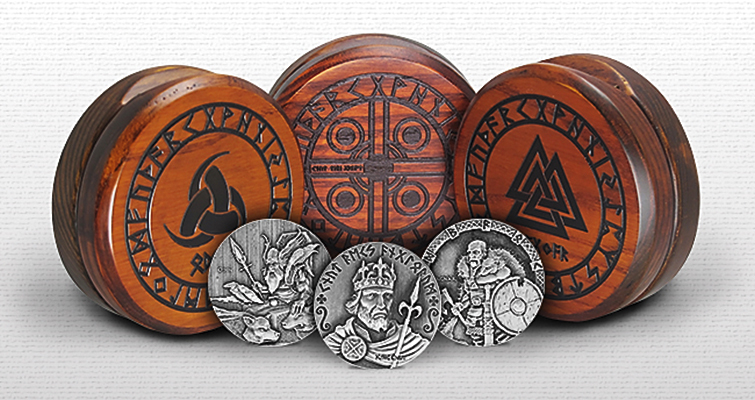 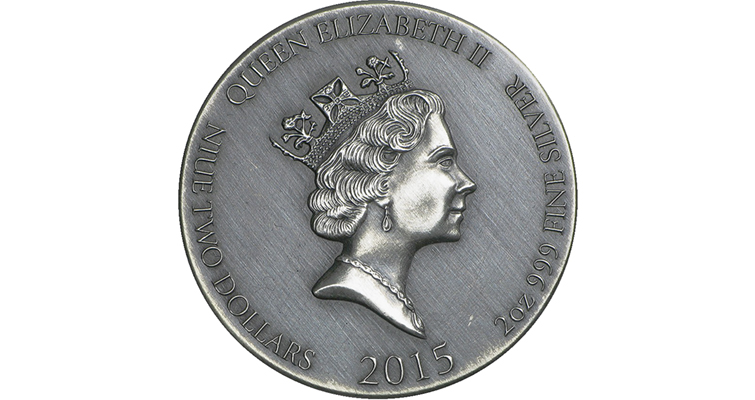 The common obverse for the 2015 Niue $2 coins in the Scottsdale silver Vikings series features the Raphael Maklouf effigy of Queen Elizabeth II.

Vikings: Gods, Kings and Warriors is a 15-coin series struck by the Scottsdale Mint and available exclusively through American Precious Metals Exchange. The first three coins were released Sept. 16.

Vikings conquered, plundered and reigned equally over land and sea, attaining notoriety as valiant, seafaring warriors. Their triumphs and expansion are well known, but their divine inspirations and leaders are lesser known, despite a surge in popularity in recent years credited to the History Channel television show called Vikings, now in its fourth season.

The creative team at Scottsdale Mint brings Valhalla (Norse mythology’s “hall of the slain”), its inhabitants, and its worshippers to life in the new series.

The first three 2015 silver coins, celebrating Odin, King Cnut and Ragnar, have been released together and will be available in the United States exclusively during a 30-day period through APMEX.

The remaining 12 coins will be issued periodically over the next three years.

Each respective subject appears on the reverse of the Proof antique silver $2 coins. The coins contain two ounces of .999 fine silver and have mintage limits of 1,999 pieces each.

A depiction of the god Odin seated on his throne, Hlidskjalf, is shrouded in mist, on one coin. Odin is flanked by his shamanic helpers — two ravens, Huginn and Muninn, and two wolves, Geri and Freki. The background features a wooden slat wall as his throne sits in the hall Valaskialf.

The reverse of another coin shows King Cnut wearing a crown and holding a scepter. His cloak clasp is a quatrefoil coin design, popular when Cnut was in power and the type he would have minted. Above him is “Cnut Rex Anglorum” written in Runic, which translates to “Cnut, King of England.”

The third coin in the new series depicts Ragnar in ninth century Viking attire and weaponry, equipped with a goosewing fighting axe, round shield, Nordic fox cloak, fighting sword, pouch and valknut necklace. Behind him is a Celtic ring with seven rune stones spelling his name.

The obverse of each coin features the Raphael Maklouf likeness of Queen Elizabeth II surrounded by the coin’s weight, purity and face value.

The edge of each coin includes a laser etched serial number, matching the serial number found on the included certificate of authenticity.

Wooden boxes accompanying the coins feature designs based on elements unique to each special design. For instance, the quatrefoil of the King Cnut coin is replicated on the lid of the box.

Buyers can receive a $40 discount when buying a three-coin subset of the first three coins.