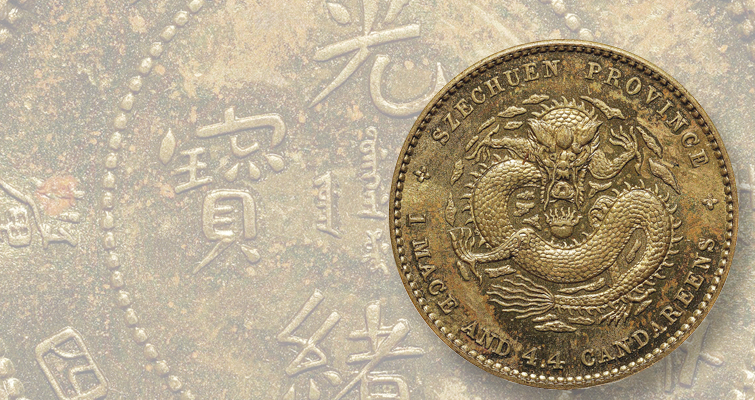 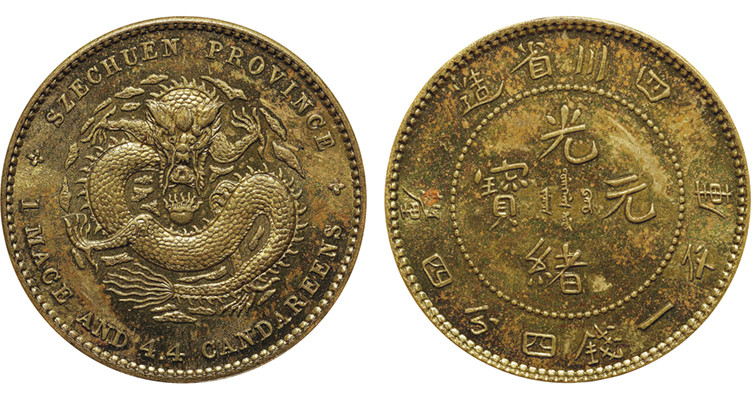 This pattern bears the value of 1 mace 4.4 candareens. 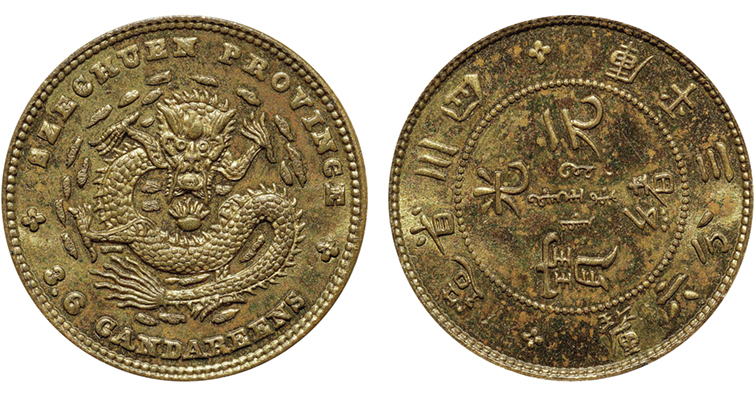 This brass gilt pattern from 1902 is denominated 3.6 candareens. 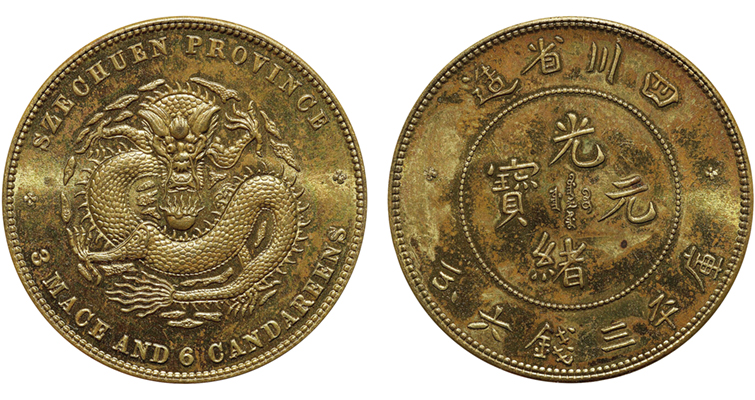 The denomination identified on this Proof 1902 pattern coin for China is 3 mace, 6 candareens. 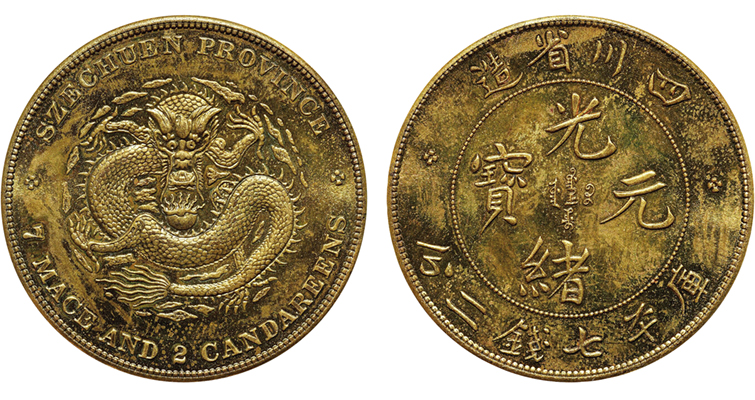 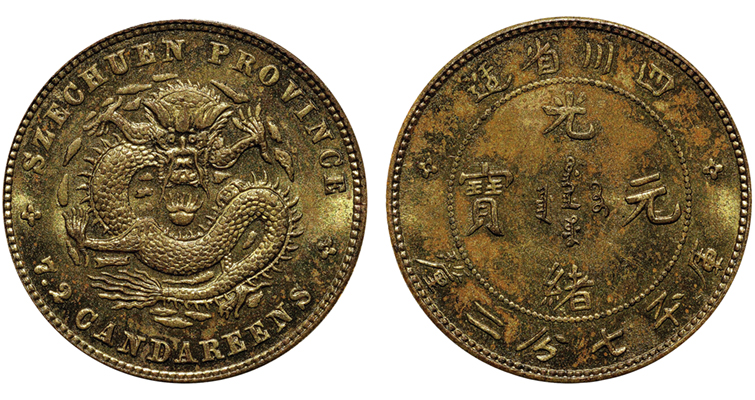 This pattern bearing the common dragon obverse carries a denomination of 7.2 candareens. 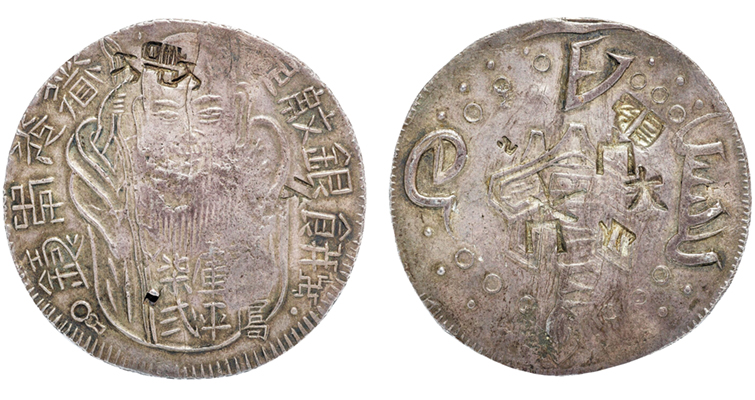 1837 Old Man dollar was issued by revolutionist Chang Wen to pay his troops stationed on the Island of Formosa. 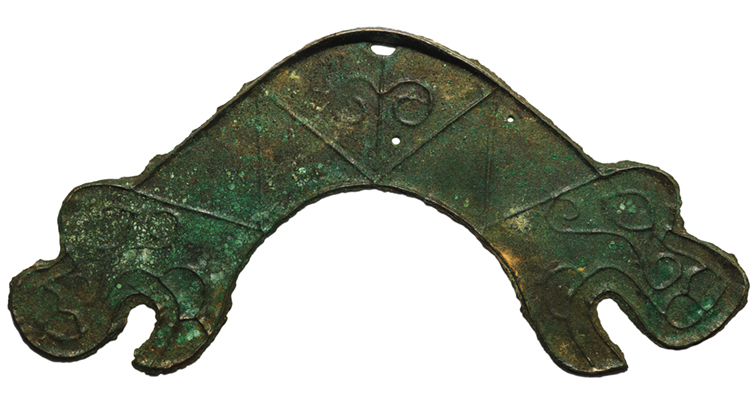 Dragon head bridge money from China traces its evolution to the fifth to third century B.C. 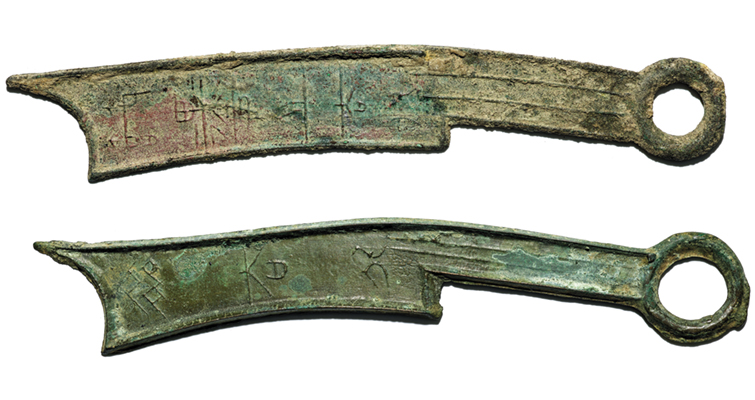 Chinese knife money traces its history back to the fifth to first century B.C.

The exhibit in the National Museum of American History will remain on display through Oct. 31, 2018.

The Proof set of patterns is among 19 items being showcased from a recent donation to the museum by the family of collector Howard F. Bowker.

The donation comprises more than 380 objects from the Bowker Collection of East Asian coins, bank notes and stamps. The collection includes rare modern Chinese coinage such as a 1927 500-cash coin made from copper and tin and an 1837 “Old Man” silver dollar, as well as a wide variety of 19th and 20th century Japanese and Korean coinage.

“The Bowker collection presents an ideal opportunity to explore what numismatic objects can reveal about the historic trade and technological connections between the United States and East Asia,” said Ellen Feingold, curator of the National Numismatic Collection at the Smithsonian.

“In the late 19th and early 20th centuries, China sought to set up provincial mints and produce struck coinage en masse, but it did not have the technical capabilities to manufacture the necessary minting equipment,” according to Feingold. “Representatives of private overseas firms, including American firms, traveled to China and worked with Chinese officials to design, manufacture, and export minting equipment for multiple Chinese mints. Americans even engraved designs for some of China’s most iconic modern coins from that period.

“For example, the Ferracute Machine Company of Bridgeton, New Jersey, worked with U.S. Mint Chief Engraver Charles Barber to produce brass gilt proof pattern coins for the Sìchuan province around 1902. These coins feature a commanding dragon design and have both English and Chinese characters. A set of these coins were held in the Ferracute Company archive for half a century before they were given to Howard F. Bowker by the president of the Ferracute Company as a gift in the 1950s,” Feingold said.

The 1837 Old Man silver dollar was issued by Taiwan (Formosa), China, 1837 to 1845, by the revolutionist Chang Wen to pay his troops stationed on the island of Formosa.

The coin in the exhibit bears chop marks attesting to its silver purity.

The newly acquired knives and bridge money will help the museum to tell the full narrative of Chinese numismatics through material culture.

The museum recognizes the generosity of the Howard F. Bowker Family and Michael Chou for their support to promote research and enhanced public access of the National Numismatic Collection through exhibition and digitization efforts.

Bowker’s passion for collecting began when he was stationed as a U.S. naval officer in Hànkou, Hubei Province, China, following the end of World War I, and he collected more than 10,000 historic East Asian artifacts.

East Asian monetary objects have been a part of the Smithsonian’s National Numismatic Collection since the 19th century.

Today, the Smithsonian’s National Numismatic Collection has strong East Asian representation and is a national resource for the study of East Asian money.

The National Numismatic Collection opened the “The Value of Money” exhibition in July 2015, and it links American history to global histories of exchange, cultural interaction, political change and innovation.

The “Value of Money” exhibit allows visitors to explore the origins of money, new monetary technologies, the political and cultural messages money conveys, numismatic art and design, and the practice of collecting money.

Admission is free. For more information, visit http://americanhistory.si.edu. For Smithsonian information, the public may call 202-633-1000. 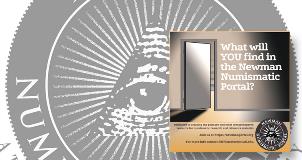 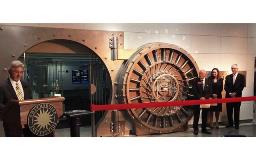 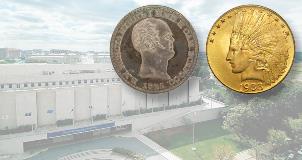