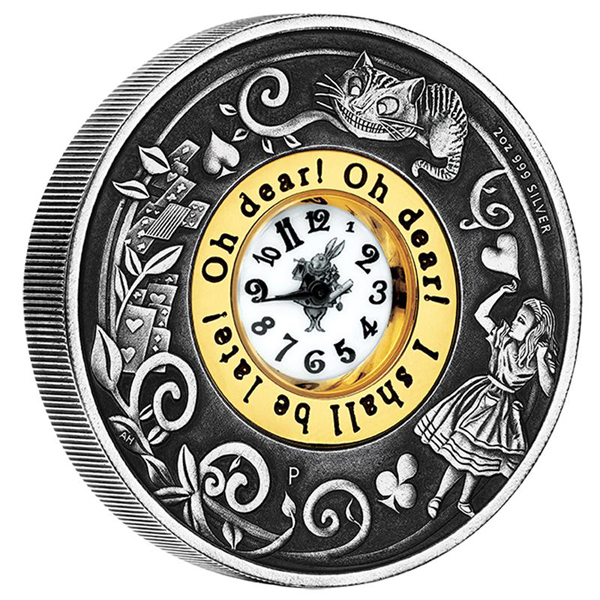 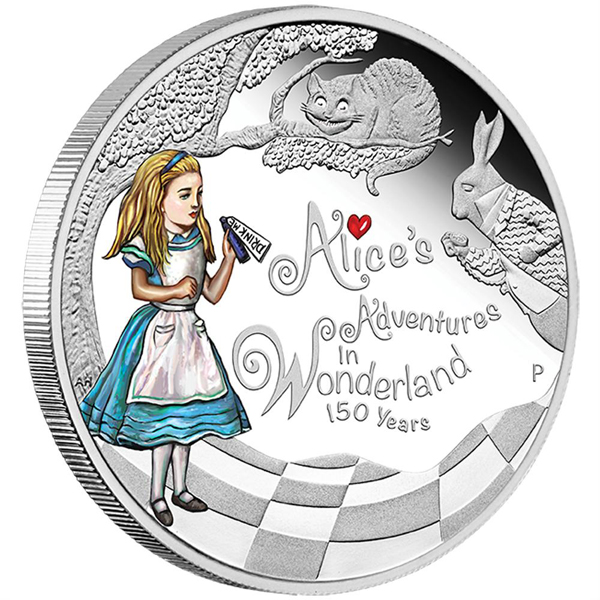 A new Perth Mint 1-ounce silver coin celebrating Alice in Wonderland's 150th anniversary features a portrait of Alice holding a bottle labelled ‘DRINK ME’ with the Cheshire cat and the White Rabbit.

1. Down the rabbit hole

The Perth Mint is celebrating the 150th anniversary of Alice’s Adventures in Wonderland with two new .999 fine silver coins struck in the name of Tuvalu.

The reverse design of the $2, 2-ounce silver coin (mintage 2,500) has a quartz movement clock, centered in an antiqued finish silver ring that depicts Alice, the Cheshire cat, and several playing cards around.

The White Rabbit is on the face of the battery-operated clock. OH DEAR! OH DEAR! I SHALL BE LATE! surrounds on the clock's gold-colored bezel.

Centered on the coin's obverse, a  quote from the book, OH MY EARS AND WHISKERS, HOW LATE IT'S GETTING! is included in a spiral form on the clock's back, which opens to replace the battery. On the surrounding silver ring's obverse appears a small rendition of the Ian Rank-Broadley Queen Elizabeth II portrait atop a rose wreath, with her name at bottom, and $2 and TUVALU 2015 around.

The second coin, denominated $1, is a 1-ounce coin, with a mintage of 5,000 pieces. It features a portrait of Alice in color, holding a bottle labeled DRINK ME with the Cheshire cat and the White Rabbit looking on. The inscriptions ALICE'S ADVENTURES IN WONDERLAND and 150 YEARS also appear along with the Perth Mint’s P Mint mark, which appears in both coins' designs.

Read more about the coins on the Perth Mint website.

Senior Editor Jeff Starck caps off his series of U.S. coins and their portrayal of historical U.S. moments with a post focused on the Civil Rights Act of 1964.

The family of George Minot, a pioneer in physiology and medicine, will offer his 1934 Nobel Prize medal in an auction by Bonhams in New York on September 21.

Have a look at it.

Kitco.com listed the following prices per ounce as of 3:18 p.m. ET Wednesday: