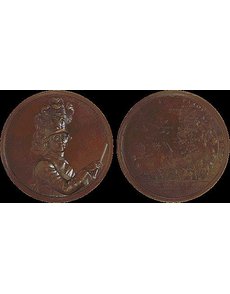 If the imposing half-length uniformed and helmeted portrait on the 92-millimeter bronze medal is any indication, Count Alexei Grigoryevich Orlov must have been a truly remarkable man. The medal tells only part of his personal saga, hailing his annihilation at Chesma of the Ottoman Turkish fleet on July 5 to 7, 1770, between the western tip of Anatolia and Chios.

The reverse presents a detailed map of the waters and islands and the positions of the Russian and Ottoman fleets, with an expression of formal thanks to Orlov and his officers from the Russian Admiralty Collegium.

The medal shown is an original strike from dies by Johann Balhassar Gass, engraver at the St. Petersburg Mint from 1768 to 1793. It is known in bronze, as is a careful later copy by P. Utkin. Ten were struck for presentation, each equivalent to 100 ducats; 10 were made in silver. It is listed as 153.1 in Mikhail Diakov’s Medals of the Russian Empire, Volume 2.

This great naval victory was not the launch for Orlov’s career. This came in 1762 when he and his brother took a leading part in the overthrow of Emperor Peter III and the elevation of the deposed monarch’s German-born spouse as Empress Catherine II, later called the Great. Alexei was given the heavy responsibility of guarding the ex-monarch’s person in the Orlov country estate of Ropsha.

Realizing that a living Peter would be a perpetual danger to Catherine, Alexei reportedly used his great strength to personally strangle his hapless prisoner.

Another bizarre assignment followed the victory of Chesma, the seduction and kidnapping of Princess Tarakanoff, who claimed to be a long-lost daughter of the Empress Elisabeth and a danger to Catherine II. After his successful seduction, Orlov delivered his alleged lover to Catherine’s agents.

Upon the death of Catherine and the accession of her vindictive, mentally unstable son, Paul, Orlov left Russia after being forced to carry the imperial crown in the ghoulish and lavish state funeral belatedly held for the long-dead Peter II. Orlov returned under Alexander I and fought actively against Napoleon. His life was a tale made up of ambition, violence, military heroism, intrigue and survival with few equals in the violent annals of Russia.

David T. Alexander is a longtime numismatic researcher and author of American Art Medals, 1909-1995. He can be reached at Alexander.Numismatics@gmail.com.