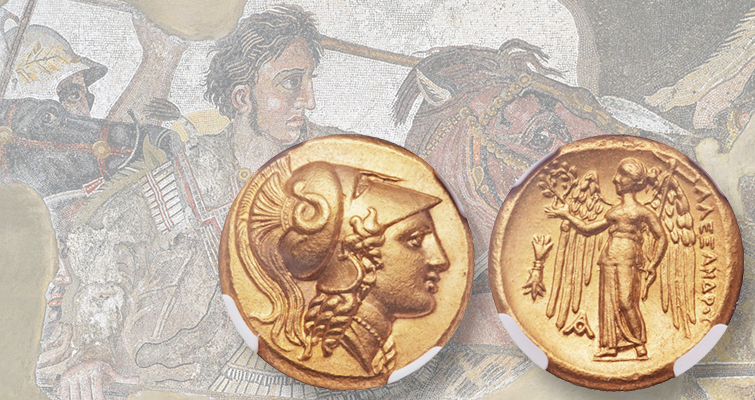 A gold distater of Alexander the Great highlights the Heritage Auctions Aug. 13 sale.

Alexander the Great’s conquest of the Persian Empire “liberated” vast stores of gold and silver that had been locked away for centuries in the treasuries across Macedonia.

An example of his coinage, with a new higher denomination made possible because of that sudden influx of precious metal, highlights Heritage Auctions’ Aug. 13 world coin auction.

The circa 325 to 323 B.C. gold distater of Alexander III (the Great) was issued in either Aegae or Amphipolis and was likely used by the ruler of the Macedonian kingdom to pay his soldiers.

A distater was equivalent to about 20 day’s wages for a Macedonian soldier in wartime, according to the firm. The coin weighs 17.22 grams and measures 22 millimeters in diameter.

According to Heritage: “The distater was likely employed to pay off many of Alexander’s veteran soldiers, who were rewarded for their labors with the equivalent of a silver talent. With the new denomination, a talent could be paid out as 120 gold distaters.”

An example like the piece in the auction, with few marks and “virtually pristine surfaces,” then, is rare, according to Heritage. Numismatic Guaranty Corp. grades it as Mint State (star), with 5/5 for surface and strike. It has an estimate of $40,000 to $50,000.

Do you find Greek coins exciting? Check out these Coin World stories about other Greek coins!