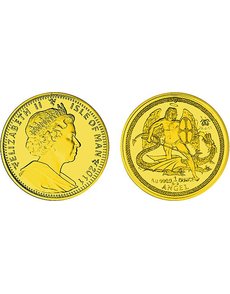 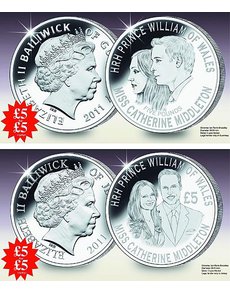 Guernsey and Jersey are marking the royal wedding with collector coins, as seen in graphics from flyers promoting the coins. Specifications and even, in some cases, mintage maximums, have not been released. 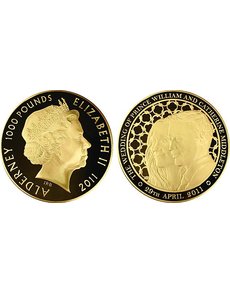 Royal wedding watchers willing to spend £40,000 ($66,112 U.S.) to commemorate the April 29 wedding of Prince William to Catherine Middleton now have a numismatic option.

It is the first time the Royal Mint has struck a kilogram coin to mark a wedding.

Both coins measure 100 millimeters in diameter.

The obverse of both coins displays the Ian Rank-Broadley effigy of Queen Elizabeth II, as well as the country name and denomination.

Their reverses bears a traditional portrait of the couple, as engraved by Royal Mint engraver Gordon Summers.

“I wanted to capture the couple in a formal portrait, seen side by side, with William in the foreground of the design. Because of the coin’s dimensions, I had the freedom to create an intricate backdrop,” he said in a press release.

The backdrop is the rose-motif window at Westminster Abbey, site of the event.

Sales of the giant coins are on a “first-come, first-served basis,” through the Royal Mint website www.royalmint.com/wedding.

Alderney is not the only Channel Islands’ crown dependency to mark the wedding with commemorative coins.

The States of Jersey (the parliamentary body in the Bailiwick of Jersey) on April 20 announced plans for a £5 coin offered in three versions to celebrate the wedding.

Within hours of the Jersey announcement, the government of the Bailiwick of Guernsey had announced its plans to issue three £5 royal wedding coins.

The coins from Jersey depict the couple facing the viewer, while the coins of Guernsey show left-facing profiles of both Middleton and Prince William.

Based on details from both announcements, it is believed that each dependency will issue a Brilliant Uncirculated copper-nickel version, as well as Proof silver and Proof .9167 fine gold versions.

All of the £5 coins measure 38.61 millimeters in diameter and are legal tender only within the respective issuing entity.

Not all specifications have been announced for the Jersey and Guernsey coins, and in the case of the Guernsey coin, the gold version is not listed on the order form provided at its website but was mentioned in a press release.

The coins are being distributed through a sales agent, Westminster Collections, with the copper-nickel versions offered at face value, plus £2.99 shipping/handling.

The Pobjoy Mint on April 22 announced a new privy marked Angel gold coin from the Isle of Man. The privy mark shows two wedding bells along with the date of the royal wedding above the dragon’s head on the reverse, which depicts the classic design of archangel Michael slaying the dragon.

The Angel has been around since medieval times and was used by King Henry VIII in 1526 as a gift to his chosen courtiers on special state occasions, according to the Pobjoy Mint.

Sufferers from the skin disease known as “King’s Evil” during the Middle Ages were presented with the Angel at annual ceremonies, and hence the gold Angel gained a reputation as a charm thought to possess special qualities — warding off all forms of illness and bringing the bearer good fortune, according to the issuer.