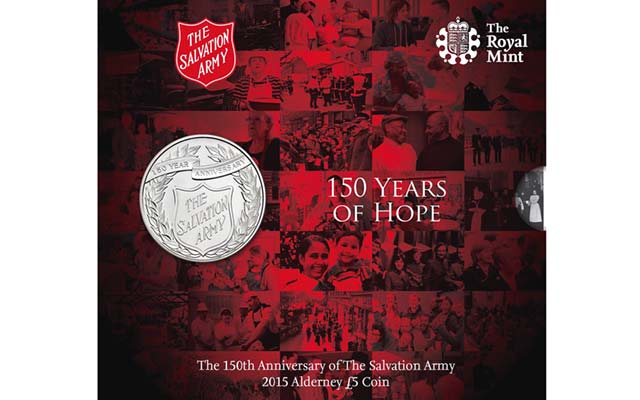 A 2015 Brilliant Uncirculated £5 coin from Alderney issued by the Royal Mint to mark the 150th anniversary of the Salvation Army is packaged in a colorful card evoking the color associated with the charity. 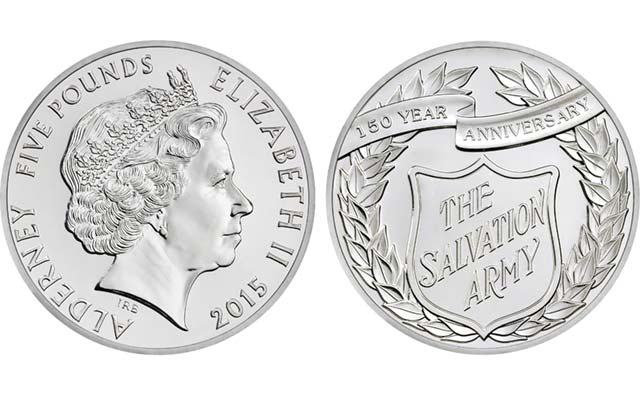 A 2015 £5 coin from Alderney issued by the Royal Mint marks the 150th anniversary of the Salvation Army.

The Salvation Army is known as a “global force for good,” using money it raises with the familiar red kettles to serve those in need.

Now, it is itself the subject of money, honorary coins being issued by Alderney through the Royal Mint.

The Royal Mint on June 1 announced that a 2015 £5 coin, available in both Brilliant Uncirculated copper-nickel and Proof .925 fine silver versions, would celebrate the Salvation Army’s 150th anniversary.

The agency was founded in 1865 by William Booth to help the vulnerable and fight social injustice.

Booth’s upbringing was one touched by hardship, but arriving in London in search of work, the pawnbroker turned preacher was shocked by what he saw. Fueled by a desire to alleviate the suffering he witnessed in the slums of the city’s East End, he sought to bring “soup, soap and salvation” to the destitute and starving — and so the work of the Salvation Army began.

Clancy said, in a press release, that working on the design “was an opportunity to learn more about the brass bands I remember on wintry days, their tunes warming up the cold and gently letting everyone around know that they are there. I wanted to create a design that ... [was] classic, celebratory and with something we all know and recognise at the heart of it.”

Both coins weigh 28.28 grams and measure 38.61 millimeters in diameter.

The copper-nickel version has an unlimited mintage and retails for £13.

The silver version has a mintage limit of 1,500 pieces and retails for £80.