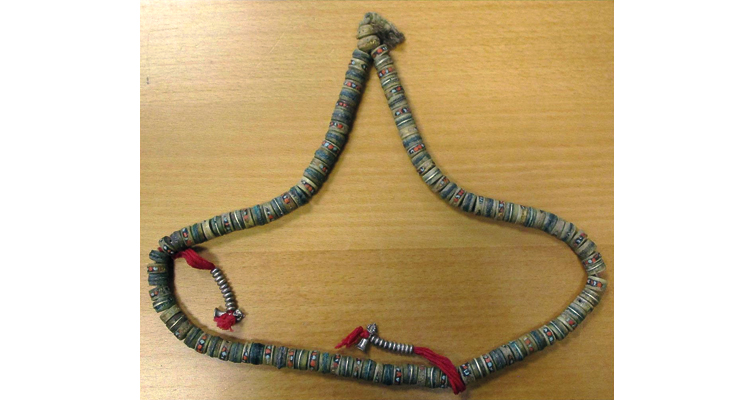 Tibetan rosary beads is made from human bones. The piece realized $660 in Stephen Album Rare Coins’ Sept. 16 to 19 auction.

The concept of what constitutes money has been stretched over time and across cultures, as evidenced by pieces in the Charles Opitz Collection offered in Stephen Album Rare Coins’ Sept. 16 to 19 auction, the firm’s 41st sale.

One such jarring example of these pieces that fall into category of “ethnographic money,” objects that often had a symbolic and sometimes an actual monetary value, is the Tibetan prayer beads made from human bones.

The string of beads (which likely dates to the 19th century or earlier) is inlaid with brass, turquoise, carnelian, coral and other semi-precious stones, also attached with two strings of silver beads ending in a miniature bell (shang), altogether weighing 135 grams (almost 4 ounces).

Tibetan prayer rosaries (mala) usually have 108 beads, a number with theological significance in Buddhism. Beads made from human bones are quite rare and used for wrathful-deity rituals.

The piece is cataloged by Opitz on page 61 of An Ethnographic Study of Traditional Money, his magnum opus.

To learn more about the topic, Opitz’s book is posted for free viewing at www.traditionalmoney.com. 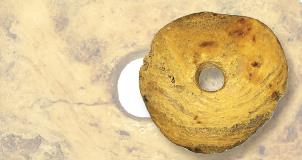 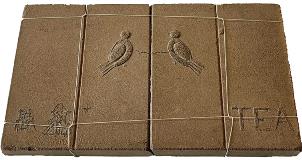 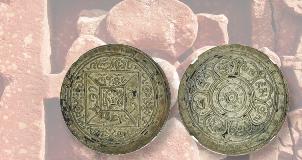