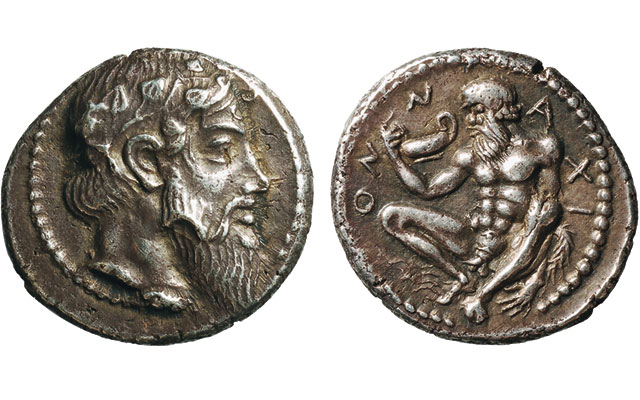 A circa 461 to 430 B.C. silver drachm of Naxos, created by the Aetna Master, highlights Tradart’s Nov. 20 auction in Brussels.

A classic ancient Greek coin from one of the grand masters of ancient coin design highlights Tradart’s Nov. 20 auction in Brussels.

The circa 461 to 430 B.C. silver drachm of the city of Naxos, designed by the person known as the Aetna Master (who was also nicknamed the Brussels Master), highlights the sale. The Aetna Master is known for his particular style and most famously created a unique tetradrachm that is in the collection of the Royal Library of Belgium.

The coin in the Tradart auction features a “majestic” profile of Dionysus, and is identified as made by the hands of the Aetna Master because Dionysus’ beard breaks the circle of dots on the rim. This original design “created a dynamic composition on the obverse to bridge the divine and real worlds,” according to the auction house. “This masterpiece of Greek coinage also illustrates the artistic evolution taking place in the 5th century.”

On the reverse, Silenus’ “striking figure,” with stylized muscles and in profile on a front-facing body, “reveals the full power of the later Archaic period,” according to  Tradart. “Dionysus’ face, on the obverse, is treated more realistically. He shows the human facet of the divine and illustrates the transitioning aesthetics announcing the classical era.”

Catalogs may be ordered via email. To learn more about the auction, visit the company's website.