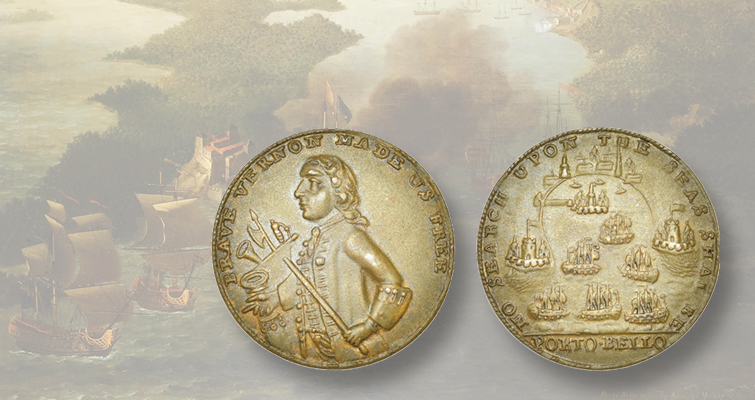 A previously unpublished, possibly unique 1739 medal for Admiral Vernon and the Battle of Portobello is coming to auction in April.

A medal that may be unique is a highlight of Dix Noonan Webb’s next auction.

The 1739 Battle of Portobello medal was previously unpublished and leads the “Merchant of the Islands” Collection of Admiral Vernon medals. The collection is one of the largest ever put together, with more than 120 different varieties, including the unpublished, possibly unique example showing the admiral and the capture of Portobello

The auction is scheduled for April 24 and 25 in London.

Tim Wilkes, specialist in DNW’s coin department, said: “Admiral Edward Vernon was a British naval commander during the War of Jenkins’ Ear between England and Spain. In 1739 he captured the Spanish port of Portobello (now in Panama) with only six ships. This feat made him a popular hero in England and the American colonies, and many medals were struck to commemorate it; in fact more different medals were struck of him than of any other 18th century Englishman. The majority of the medals commemorate Portobello, while others mark later actions at Fort Chagre and Cartagena; the latter was portrayed on the medals as an English victory despite the fact that in reality the opposite was true. Portobello and Vernon became widely used for place names — for example Portobello Road in London and George Washington’s estate Mount Vernon in Virginia. What makes this particular medal unique is the cannon and arms in front of Vernon on the obverse.”

The Extremely Fine medal in the auction is made of a pinchbeck metal (a form of brass, an alloy of copper and zinc, mixed in proportions so that it closely resembles gold in appearance) and it is unsigned.

It bears the motto BRAVE VERNON MADE US FREE. A half-length figure of Vernon holds a baton with a cannon and arms in front of him, while on the reverse three ships enter Portobello harbor, with three vessels waiting outside. 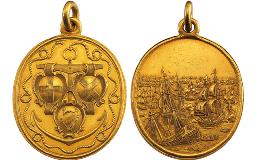