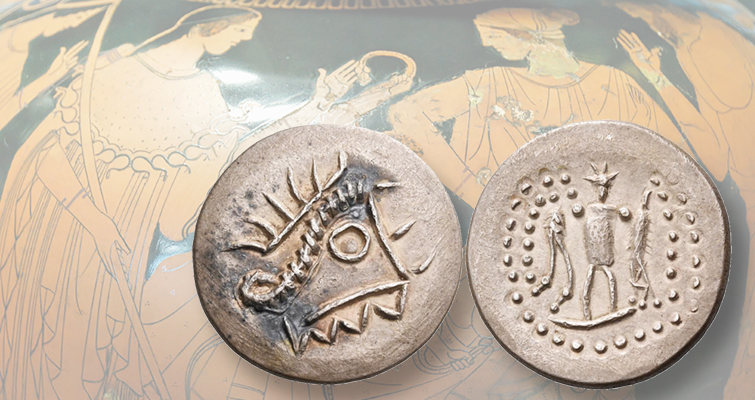 An imitation silver tetradrachm from a Celtic tribe along the Danube River features a very abstract design.

An ancient coin sold in Nomos Ag’s auction No. 18 shows that abstract designs have existed for millennia.

The first century B.C. silver tetradrachm was issued by an uncertain Celtic tribe along the Lower Danube River. It is an imitation of coins from the Greek island Thasos.

The coin weighs 16.73 grams and measures 31 millimeters in diameter, the size of a Kennedy half dollar and slightly more than half an ounce.

The coin shows a completely deconstructed wreathed head of Dionysos to right.

The reverse shows a curiously formed figure of Herakles standing facing, holding a club and a lion’s skin.

It is graded by the auction firm as “Virtually as struck.”

The Balkan imitations of the late Hellenistic tetradrachms of Thasos were produced in enormous numbers, according to the firm.

“Some are stylistically quite good (in fact, almost as good as the originals), but for most the style is best described as amusing, while what might be termed the bottom end shows a completely non-Hellenic spirit that changes the types of Dionysos and Herakles into grotesque figures surrounded by pellets,” the auction firm said. “The obverse head has been artistically schematized in an almost modern, Picasso-esque way, while the reverse figure of Herakles seems to have been turned into a triumphant fisherman holding two prize salmon. 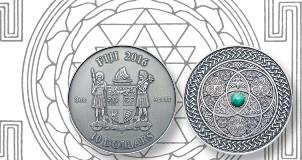