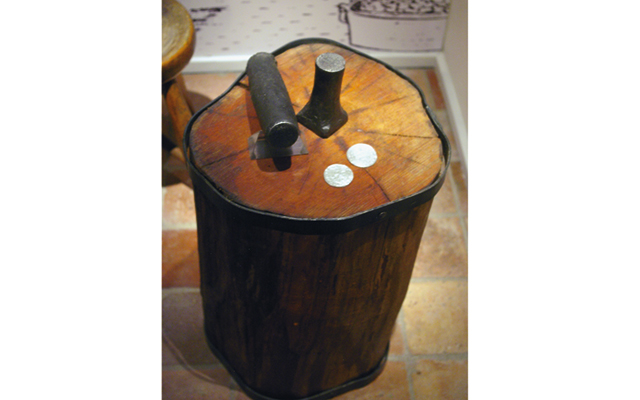 A tree stump was used as the support for minting early medieval coins before the introduction of the screw press. A strip of metal was placed between the two dies, struck with a hammer, and trimmed using tin snips to the correct weight.

Before the screw press was invented, early coins were minted in the Hamburg, Germany, area by use of a hammer to stamp out coins placed between upper and lower dies mounted on a tree stump.

This is just one of the many numismatic displays visitors to the Hamburg History Museum can examine.

The city along the River Elbe is Germany’s second largest city after Berlin and lays claim to the world’s second oldest bank.

As a history museum that chronicles the birth of Hamburg to the present, it highlights the city’s role in shipping, banking, the Hanseatic League and the Reformation, as well as the great fire of 1842, and Hamburg’s Jewish community.

The major numismatic exhibition is on the first floor (second level) in Das Jahrhundert der Reformation (The Century of the Reformation) wing, which leads to the Hamburg in der frühen Neuzeit (Hamburg in the Early Modern Period) area.

How to get there

The museum is at Holstenwall 24, and is easily reached either from the St. Pauli stop on the U3 U-Bahn (Yellow) line a block around the corner, or via the No. 112 bus at the Hamburgmuseum stop in front of the museum.

The museum is handicap accessible, has a cafe, book shop and library, and photography (without flash) is permitted. Visit the English website for more information.