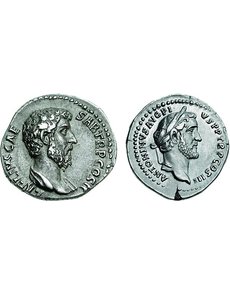 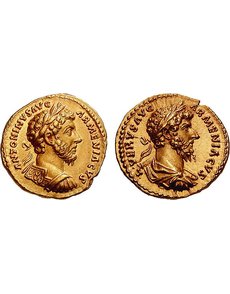 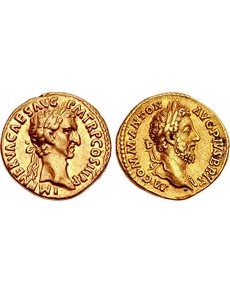 Nerva, left, was the first of Rome’s “adoptive emperors” and Commodus, right, was its last. Both are depicted on gold aurei. 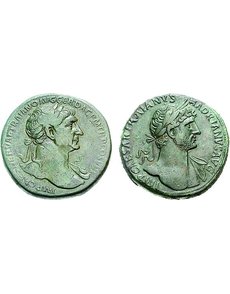 Trajan, far left, was one of Rome’s greatest generals, and his successor, Hadrian, shown at near left, enjoyed a comparatively peaceful reign. Both appear here on brass sestertii.

The 18th century historian Edward Gibbon characterized the period A.D. 96 to 180 as the happiest and most prosperous time the world had ever known. Throughout that time Rome was ruled by the “adoptive emperors,” under whom the empire rose to its height of achievement and then started on the pathway of its long, humbling decline.

The period of the adoptive emperors begins in A.D. 96 with the murder of Domitian (reigned 81 to 96), the last of the “Twelve Caesars.” Until this time in imperial history, emperors had been members of the Julio-Claudian or the Flavian dynasties, or had come to power during civil war.

Collectors rejoice in coins of the adoptive emperors because the series is short, interesting and comparatively affordable. With the exception of gold aurei of the first member, Nerva (A.D. 96 to 98), the gold, silver and base metal coins are comparatively plentiful.

Since Nerva’s predecessor was murdered in a palace coup, the senate took the initiative to select as the new emperor one of their own, an elderly lawyer and legislator named Nerva, who twice had held the office of consul before he ascended the throne.

Perhaps one of his strongest attributes in the eyes of the senate was the fact that he had no children to whom he could aspire to pass the throne. The senate had survived two hereditary monarchies and probably didn’t have the stomach for another.

Some problems loomed, though: The army had been a strong supporter of Domitian, and when their emperor was slain and replaced by a candidate from the senate, without consultation, it was not well received. For this reason, Nerva’s regime was never secure. After surviving plots on his life, Nerva tried to placate the army by adopting as his son (and heir) the general Trajan, then the governor of Upper Germany.

Four months later Trajan became emperor after what is thought to have been the natural death of Nerva, who was elderly. This was the first time in Roman history that an emperor was not succeeded by a close family relative or ousted by a rebel, and it set a precedent for the next few decades.

Trajan (98 to 117) was an effective emperor remembered principally for his building projects and his aggressive expansion of Roman territory — indeed, the size of the empire reached its zenith near the end of his reign.

Except for a few special reverse types on brass sestertii, Nerva’s coinage was rather mundane. The opposite can be said of Trajan’s issues, which were often exciting. He used coinage to chronicle his wars and building projects, all the while honoring the gods with a wide variety of standard reverse types.

Trajan was also childless, which allowed for the perpetuation of the adoptive sequence. The record of Trajan’s succession by a distant relative, Hadrian, is murky. Several ancient sources suggest Trajan did not want Hadrian to succeed him, but that Trajan’s widow, Plotina, orchestrated his succession after her husband’s death.

Whatever the truth, Hadrian (117 to 138) was hailed emperor and ruled for more than two decades. He immediately shrank the empire by pulling back from more remote regions that were difficult (or impossible) to defend, and he better fortified the new borders.

Hadrian is famous for having traveled for most of his reign, and his coinage has some remarkable reverse types, many of which are devoted to his travels and to the provinces he visited.

Near the end of his life Hadrian adopted the nobleman Aelius (who may have been Hadrian’s illegitimate son) as heir, but Aelius died unexpectedly in 138, leaving Hadrian in a bind. He then selected two young men, Marcus Aurelius and Lucius Verus, as his successors.

Since they were too young by the standards of the day to rule, Hadrian adopted a mature senator, Antoninus Pius, as his immediate heir. Antoninus Pius (138 to 161) became emperor as a place-holder for Hadrian’s intended heirs but lived far longer than Hadrian probably would have expected.

Unlike Hadrian, who was enamored with Greek culture and traveled for most of his reign, Pius was a thoroughly patriotic Roman for whom there is no record of travels outside Italy during his reign of 23 years.

The coinage of Antoninus Pius is less colorful than that of Trajan or Hadrian, but it nonetheless contains a fascinating series devoted to the 900th anniversary of the foundation of Rome, which occurred under his watch in 148.

Finally, in 161, the reins of power passed to Hadrian’s intended heirs, Marcus Aurelius (161 to 180) and Lucius Verus, who ruled jointly (until Verus died in 169). Their duties were divided, with Aurelius based in the West to guard the northern frontiers of Europe and Verus in the East to keep the Persians at bay.

The coinage of Verus is relatively straightforward, with his notable reverse types devoted to victories against Persia. Aurelius reigned longer, and has some interesting types related to his successes in war and to honors earned during his long reign.

The saddest commentary on this development is that Marcus Aurelius, renowned as a philosopher-emperor, must have been aware of the poor moral character of his chosen heir, Commodus (sole reign, 180 to 192), and yet could not summon the strength to find a more suitable successor.

The reign of Commodus was among the most depraved in Roman history and when he was murdered in a palace coup on New Year’s Eve, 192, the era of the adoptive emperors came to an end. From that point onward, emperors were elected the old-fashioned way: through family ties or force of arms. ¦