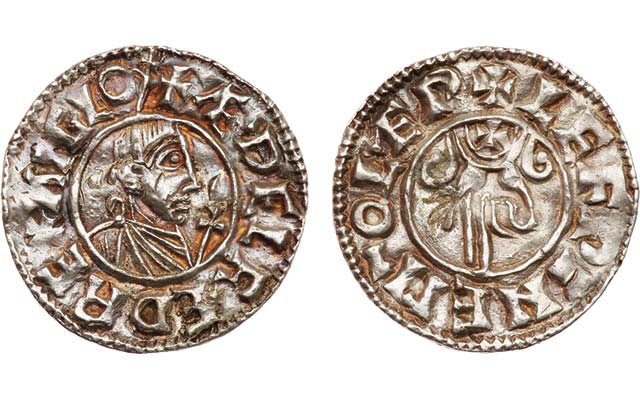 A circa 991 A.D. silver penny from Lewes, England, shows the manus dei, or “Hand of God,” in benediction and reflects the turbulent, fearful times at the end of the first millennium.

Imagine the populace entering into a panic as the end of a millennium approached, and the future of life on Earth was cast into question.

The occasion this time wasn’t Y2K, though.

Instead, consider the last decade of the first millennium, when “the shame of Aethelred’s succession achieved through fratricide and regicide was still felt and millenarian fears about the end of the world found substance in ever increasing pagan Viking raids on [England],” as the June 2 auction catalog for Ira & Larry Goldberg Coins and Collectibles recounts the history.

In the Goldbergs’ auction, a silver penny of Aethelred II (“the Unready”) realized $7,931, including the 17.5 percent buyer’s fee. The attributes making the coin special are the “Hand of God” design on the reverse, shaped in benediction. The coin is one of only three known from the mint in Lewes.

The coin is not recorded in Viking Age Hoards and Late Anglo-Saxon Coins by K. Jonsson, and only about 140 examples of the manus dei or “Hand of God” type are known, according to the auction firm.

According to the Goldberg catalog, the Hand of God type, of which the Benediction is the rarest variety, may have been intended to invoke a very strong message to the populace and perhaps even to God. “The manus dei had of course been used as a coin type in England during the ninth century but in advance of the first millennium it was perhaps more relevant than ever,” the cataloger writes.

It is graded About Uncirculated, Details, by Numismatic Guaranty Corp., and had an estimate of $6,000+.