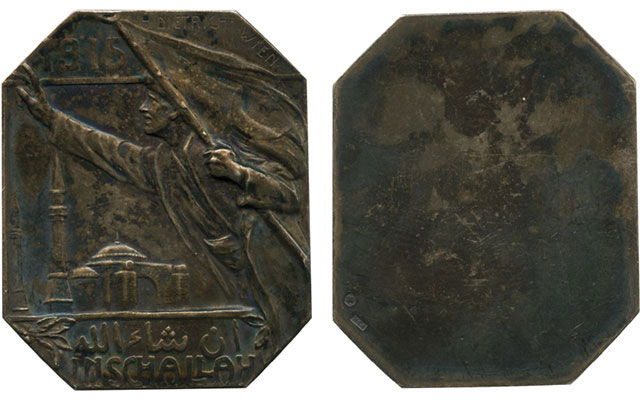 Uniface silver plaquette by Austrian medalist Hans Dietrick depicts a Turkish warrior in archaic garb and banner before the basilica of Hagia Sofia.

INSCH ALLAH, “God Wills It,” proclaims the 49- by 40-millimeter, 32.15-gram silver uniface plaquette by Austrian medalist Hans Dietrich, struck at Vienna in 1915. It presents a Turkish warrior in archaic garb and banner before the basilica of Hagia Sofia, built in what was then Constantinople in A.D. 360.

The plaquette commemorates the proclamation of Jihad or Holy War by Ottoman Sultan Mehmed V as Caliph or Commander of the Faithful as the Turks plunged into World War I as an ally of Germany and Austria-Hungary.

Serious students of Islam point out that in proper Arabic, the term “Jihad” means simply struggle or striving and that forced conversion of monotheists such as Jews, Christians, and Zoroastrians by war was forbidden.

In the glory days of early Arab conquest of the Middle East, North Africa and lands adjacent, the head of the empire was titled “Caliph.”

The Ottoman Empire reached its peak in the siege of Vienna in 1683, and from that high point European powers advanced against it in central Europe, North Africa, and the Middle East. They confidently expected the death of the “Sick Man of Europe” as they termed the decrepit Ottoman state, but the 1908 Young Turk revolution began to revive the supposedly sick man.

The Turks began receiving massive investments and military aid from Imperial Germany. When World War I broke out in 1914, the Ottomans were at first neutral, enjoying a bidding war for their support conducted by the Allies and Central Powers. By 1915 the Germans won and cast about for ways to increase Turkey’s value in the war effort.

The Caliphate was seen as a providential weapon and Sultan Mehmed V, a powerless puppet of Enver Pasha and the Young Turks, was induced to proclaim Jihad at the end of 1914. It was hoped that Holy War against the Allies would especially damage the British Empire through its millions of Muslim subjects in India.

The British responded by building up Hussein ibn ‘Ali, Sharif of Mecca, direct descendant of the Prophet who hoped to become king of the Arabs. Contradictory promises were made to the Arabs, Zionists, and fellow allies to induce revolt against Turkish overlords and expand the British and French empires. The Jihad failed. Though its troops were valiant fighters, the Empire disintegrated and Turkish Republic founder Kemal Atatürk drove the last Caliph, Abdülmecid II, into exile in 1922.

David T. Alexander is author of American Art Medals, 1909-1995 and a fellow of the American Numismatic Society. He is a numismatist/researcher for Harlan J. Berk Ltd.