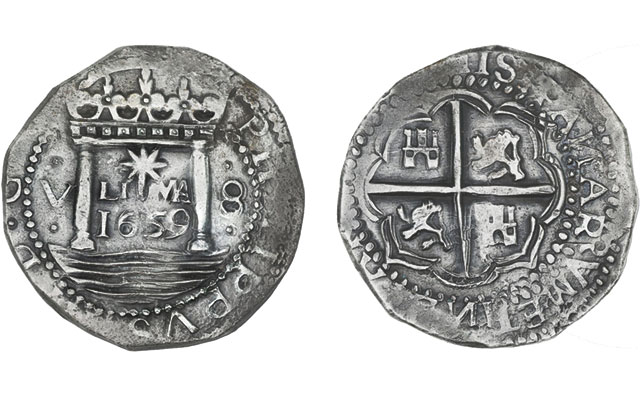 The 1659-V silver 8 real, Series IA coin, is the “finest known” example from the “Star of Lima” series, according to auction house Daniel Frank Sedwick, LLC. The firm offers the coin at auction on Nov. 6. 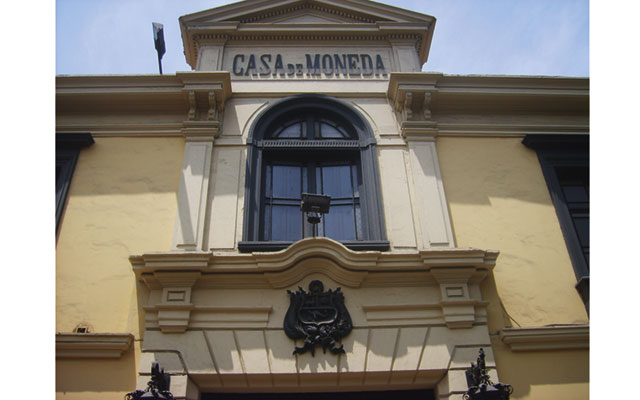 The Casa de Moneda de Lima, or Lima Mint, was reopened after a 67-year hiatus to strike the short-lived “Star of Lima” coin series to alleviate a coin shortage.

When a coinage shortage affected Lima, Peru, in the late 1650s, local officials decided to reopen the long-closed Spanish colonial mint to solve the problem.

But that solution created a problem of its own, and a unique, short series of coinage known as the “Star of Lima” coins was the result.

Why these were made

Star of Lima coins were issued from January 1659 to April 1660. Before it began coinage production, the town council did not seek or receive authorization from King Philip IV to strike coins there. The viceroy, Count Alba de Liste, thought it was within his authority to reopen the mint that had been shuttered for 67 years and begin production to alleviate the coinage shortage.

Apparently the town council did make some effort at seeking authority after it had resumed coinage production. However, when the king found out, he ordered the mint’s closure, and it remained closed until reopening with royal sanction in 1684.

"This is a case of ‘it’s easier to ask forgiveness than it is to get permission,’ ” Sedwick wrote in an essay in the catalog. “... Forgiveness eventually came, but permission did not.”

Many Star of Lima coins that are known today can be traced to a shipwreck off the coast of Jupiter, Fla. Pieces from the wreck of the San Miguel de Arcangel are often round and well-struck presentation pieces, just like the example in the Sedwick auction, which is from that wreck. Cobs are typically unevenly shaped from being struck on planchets that were not perfectly round, using minting technology that was still crude.

A portion of the wreck was discovered in 1987 by Peter Leo, though other portions, including its hull, have not been located. The ship was a small, rapid transporter used for communication, not a treasure galleon, but when it sank in a hurricane in October 1659, its cargo included many Star of Lima coins.

Salvage is ongoing, with items continuing to enter the marketplace, Sedwick said. Besides a few gold ingots, a large silver ingot, some Bogota gold cobs and rare Cartagena silver cobs, what has been found so far is mostly “low-end silver cobs of Mexico and Potosi,” and a large amount of the 1659 Star of Lima issues, according to Sedwick.

Many Star of Lima examples that were not recovered in the shipwreck have slightly modified designs.

The quality of the strikes and the difference in designs suggest that those coins in the wreck were destined for King Philip IV to receive approval, according to Sedwick.

The Star of Lima series takes its name from the enormous star above the mint name LIMA on the coin’s obverse. These stars generally have eight points but occasionally only feature six or even five points. Though stars had been used on coinage of Lima in the late 1500s, those stars were smaller and less prominent.

On the Series 1A Star of Lima type, the star and mint name are above the 1659 date, between the two pillars and below a crown. Outside the pillars a large V (for the assayer) is at the left and an 8 (for the denomination, in reales) is at the right.

Series 1B, with the denomination and assayer text on both sides of the pillar, and a five-pointed star, is “probably a brief type” since these examples (all struck in 1659) are rare, according to Sedwick.

The main identifier for the type designated Series II is the Lima Mint mark, appearing as L-M, though there are numerous minor varieties. These coins were issued in 1659.

The Series III issues, all of which were struck in 1660, “are therefore much rarer than the first two series,” Sedwick wrote. These coins feature the L Mint mark and the motto PLVS VLTRA in the design.

Star of Lima coinage is found in smaller denominations than just the large 8-real coin, with differences throughout the various series explored in Sedwick’s essay about the type.

Sedwick’s auction offers 17 Star of Lima coins of various denominations and types and conditions, but the 1659-V example in Sedwick’s auction is, by all accounts, “the finest known specimen,” according to the firm.

The crown and pillars are detailed, and the inscriptions are “well struck” with most of the king’s name PHILIPPVS visible in the legend.

“Save for a touch of corrosion, this coin is undeniably Mint State, beautifully toned and worthy of the best collections,” the auction firm said.