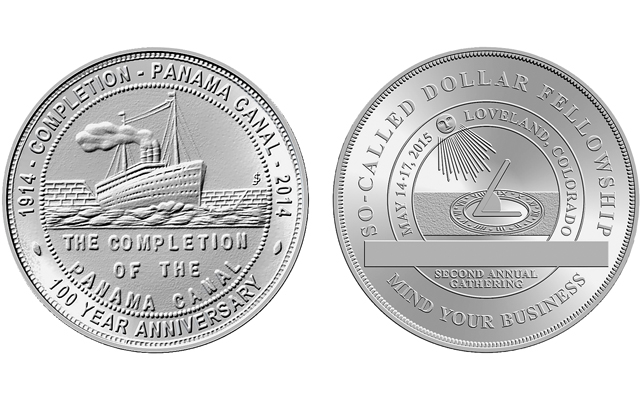 Orders are being taken by Jeff Shevlin, the "So-Called Dollar Guy," for brass, copper and .999 silver versions of the "2nd Annual So-Called Gathering" medal.

The medals are being struck by Daniel Carr at his Moonlight Mint in Loveland, Colo., where the gathering of so-called dollar collectors is set to be held May 14 to 17.

The medals will be ready for distribution after Shevlin returns from the gathering around May 20.

Add $4 for shipping and insurance and send check to Shevlin at 1894 E. William Street, Suite 4-240, Carson City, NV  89701. PayPal is also an option. Please add 3% for the fees or send "friends or family" to avoid the fees. Send to SoCalledGuy@hotmail.com.

The obverse design is an adaptation of HK-432 from the 1915 Panama-California Exposition as originally cataloged by Harold E. Hibler and Charles V. Kappen in So-Called Dollars. The gathering medal features a ship sailing through the Panama Canal locks, with minor modifications to the original design.

The reverse design is an adaptation of HK-852, Dickeson's Continental Dollar from the 1876 Centennial Exposition modified with SO-CALLED DOLLAR FELLOWSHIP, SECOND ANNUAL GATHERING, May 14 - 17 2015 and LOVELAND, COLORADO.

Email Shevlin with your order information so he can place your order as soon as possible.

If you are a So-Called Dollar Collector and are interested in being an attendee at the So-Called Gatherings in the future, contact Shevlin via email.