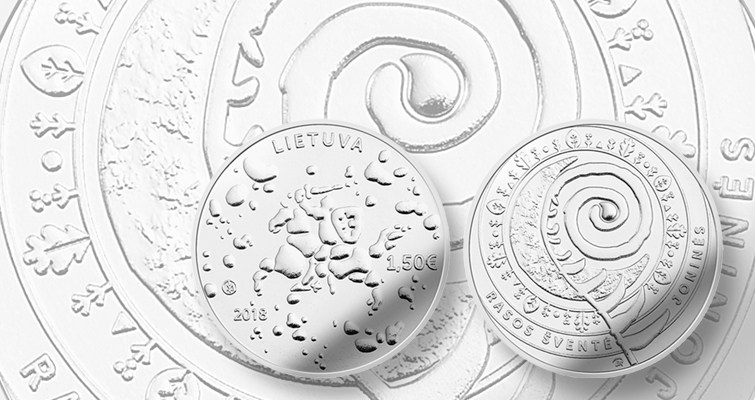 A commemorative 2018 coin design for Lithuania's midsummer Jonines festival depicts an unfurling “blooming” fern fiddlehead backed by the moon and sun, with a border incorporating greenery and dew droplets. Shown is the copper-nickel €1.50 version. A colorized Proof silver €5 version is also being released. 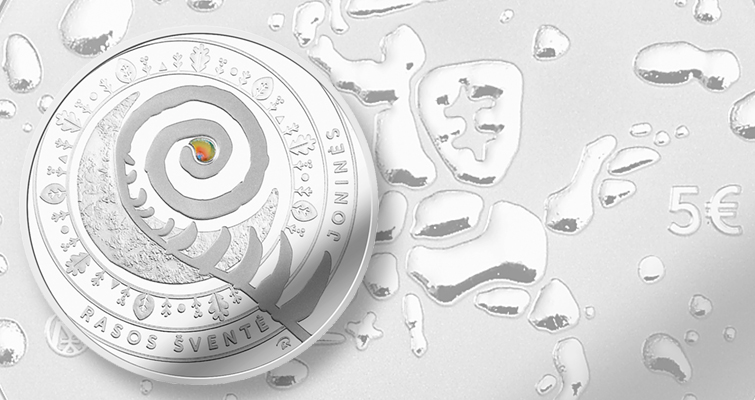 The Bank of Lithuania is ringing in the season of sun with a commemorative issue to be released in two denominations on June 7, for the country’s midsummer Jonines festival.

According to the Bank of Lithuania statement, the June 24 holiday also known as Rasos is held just after the summer solstice. At this time of year, the smell of jasmine, colors of peonies and poplar blossoms are abundant, and the dew on the morning of the festival is said to have special powers for the mind and body. The holiday’s traditions include bonfire burning, wreath making and a hunt for a mythological blooming fern.

The coin design embodies the spirit of the celebration. The reverse depicts an unfurling fern fiddlehead with the fern blossom in its center, all backed by the moon and sun and encircled by a border incorporating greenery and dew droplets. The artwork is surrounded by the inscriptions JONINES and RASOS ŠVENTE. The obverse contains dew droplets situated to form the knight from Lithuania’s coat of arms, the inscriptions LIETUVA, 2018, and €5 or €1.50, and the Mint mark of the Lithuanian Mint.

The Proof .925 silver €5 coin version weighs 12.44 grams, measures 28.7 millimeters in diameter, has a mintage limit of 3,000 pieces and is priced at €49. A stylized oak wreath is displayed on its edge. Pad-printing technology was used to colorize the central fern “blossom.”

The coins were designed by Egle Ratkute and struck at the Lithuanian Mint. For more information, visit the Bank of Lithuania’s website.